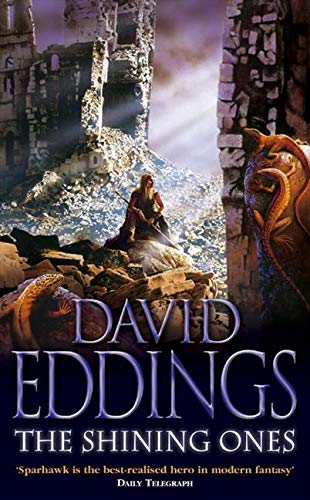 The Shining Ones by David Eddings

Continuing the epic tale begun in Book One of The Tamuli, Domes of Fire...

The Shining Ones: Book Two of The Tamuli by David Eddings

Continuing the epic tale begun in Book One of The Tamuli, Domes of Fire...

Prince Sparhawk and Queen Ehlana must remain with their retinue of Pandion Knights in the Eastern land of Daresia to assist the beleagured Emperor Sarabian. The rebellion against Sarabian within the walls of the famed pearl-encrusted city of Matherion was defeated. But Sarabian's enemies will regroup and plan an attack that will be less easily routed. Trolls despoil Atan in the North, and vampires, werewolves, zombies, ghouls and Ogres form a vast conspiracy to take over the Empire. Most disturbing of all are reported sightings of Shining Ones among the hordes. These luminous beings inspire more fear than the rest combined.

Queen Ehlana has taken Sarabian in hand and is educating him in ruthless statecraft - her skill in which has always inspired Sparhawk's admiration. The Pandion Knight meanwhile resurrects the Bhelliom - with Flute's help (actually, Sparhawk has no idea where it is, but Flute, fortunately, does) - and awaits the arrival of the full complement of Pandion Knights needed for the coming battle.

The enemies of the Empire know that possession of the Bhelliom makes Sparhawk as dangerous as any god. But gods are among his foes. The outcome of the conflict is beyond the possibility of prediction... and while Sparhawk defends the far-flung Tamul Empire, he cannot also protect his beautiful Queen.

Born in Washington State in 1931, David Eddings grew up near Seattle. He graduated from the University of Washington and went on to serve in the US Army. Subsequently he worked as a buyer for the Boeing company and taught college-level English. His first novel was a contemporary adventure, but he soon began a spectacular career as a fantasy writer with his series The Belgariad. He consolidated his success with two further popular series, The Malloreon and The Elenium.

GOR001203706
9780007217076
0007217072
The Shining Ones: Book Two of The Tamuli by David Eddings
David Eddings
Used - Very Good
Paperback
HarperCollins Publishers
2006-01-03
482
N/A
Book picture is for illustrative purposes only, actual binding, cover or edition may vary.
This is a used book - there is no escaping the fact it has been read by someone else and it will show signs of wear and previous use. Overall we expect it to be in very good condition, but if you are not entirely satisfied please get in touch with us
Trustpilot