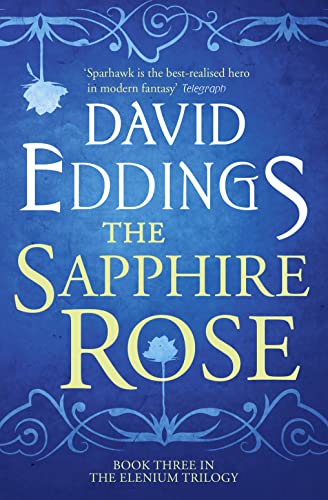 The Sapphire Rose by David Eddings

Book Three of the ELENIUM is fantasy on a truly epic scale, in which the Pandion Knight Sparhawk must finally use the power of the jewel.

The Sapphire Rose (The Elenium Trilogy, Book 3) by David Eddings

Book Three of the ELENIUM is fantasy on a truly epic scale, in which the Pandion Knight Sparhawk must finally use the power of the jewel.

Sparhawk and his allies have recovered the magical sapphire Bhelliom, giving them the power to wake and cure Queen Ehlana.

But while they were away an unholy alliance was brokered between their enemies that threatens the safety of not just Elenia but the entire world.

By returning to save the young queen, Sparhawk risks delivering the Bhelliom into the hands of the enemy.

As battle looms, Sparhawk's only hope may be to unleash the jewel's full power. But no one can predict whether this will save the world or destroy it...

'Sparhawk is the best-realized hero in modern fantasy' Daily Telegraph

GOR007206554
9780007578993
0007578997
The Sapphire Rose (The Elenium Trilogy, Book 3) by David Eddings
David Eddings
The Elenium Trilogy
Used - Very Good
Paperback
HarperCollins Publishers
20150312
656
N/A
Book picture is for illustrative purposes only, actual binding, cover or edition may vary.
This is a used book - there is no escaping the fact it has been read by someone else and it will show signs of wear and previous use. Overall we expect it to be in very good condition, but if you are not entirely satisfied please get in touch with us
Trustpilot