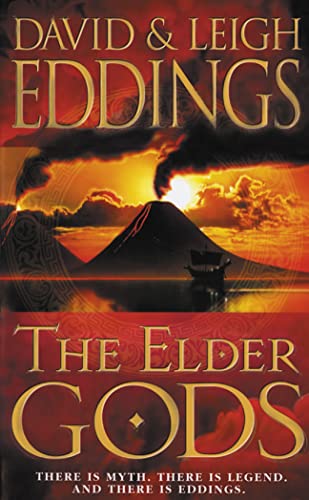 The Elder Gods by David Eddings

New series, new world, and a glorious story destined to reach the biggest audience yet.

The Elder Gods by David Eddings

New series, new world, and a glorious story destined to reach the biggest audience yet.

They are called the Dreamers. They look like sleeping children. They are, in fact, Gods.

There are eight elder Gods, four awake, four asleep, by turns. When they sleep, they sleep for eons. The only time the Gods are vulnerable is when the sleepers awake.

Knowing this, the Ruler of the Wasteland, ambitious to become a God by destroying Gods, watches and waits, marshalling troops for war. So it is that the coming of the Dreamers passes unnoticed in the Wasteland. But the world is soon out of kilter, it is being dreamed, and the awakening of gods is no simple transition.

The sleeping Gods are stirring. When they wake the battle will begin.

There will be trickery and deception. Tribes of humans, creatures of the deep, the sea itself and the earth, the weather and the divinities, all will play their part in the epic struggle against the Ruler of the Wasteland.

In their own exquisitely effortless style, David and Leigh Eddings weave a web around the reader of magic, mystery and humour.

The Elder Gods is the first in a new and eagerly anticipated series of four books from the bestselling authors David and Leigh Eddings. It is a magical, action-packed, totally engaging and characterful novel on the grandest scale.

'All the verve and pace we've come to expect.'
The Dark Side

David Eddings was born in Washington State in 1931 and grew up near Seattle. He graduated from the University of Washington and went on to serve in the US Army. Subsequently he worked as a buyer for the Boeing company and taught college-level English. His first novel was a contemporary adventure, but he soon began a spectacular career as a fantasy writer with his bestselling series The Belgariad.

GOR000942901
9780007157600
0007157606
The Elder Gods by David Eddings
David Eddings
Used - Very Good
Paperback
HarperCollins Publishers
2005-01-03
512
N/A
Book picture is for illustrative purposes only, actual binding, cover or edition may vary.
This is a used book - there is no escaping the fact it has been read by someone else and it will show signs of wear and previous use. Overall we expect it to be in very good condition, but if you are not entirely satisfied please get in touch with us
Trustpilot