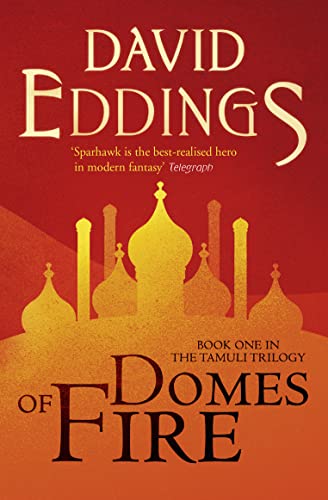 Domes of Fire by David Eddings

`Others may vie for the top position ... but Eddings reigns supreme' Publishers Weekly

Domes of Fire (The Tamuli Trilogy, Book 1) by David Eddings

`Others may vie for the top position ... but Eddings reigns supreme' Publishers Weekly

After saving Queen Ehlana and defeating the evil god Azash, Sparhawk is left to enjoy the hard-won peace of his kingdom. But peace is fragile and easily broken.

From the east, whispers of horrific armies being raised from the dead surface. Tales of ancient warriors and dreadful monsters who are tearing the kingdom apart.

Seeing the threat this poses to their kingdom and people, Ehlana and Sparhawk set out with a retinue to Matherion, the Tamuli capital. Little do they know that the enemy is already within the gates of fire-domed Matherion awaiting their arrival . . .

`Others may vie for the top position... but Eddings reigns supreme'
Publishers Weekly

`Sparhawk is the best-realized hero in fantasy` Daily Telegraph

GOR007468787
9780007579006
0007579004
Domes of Fire (The Tamuli Trilogy, Book 1) by David Eddings
David Eddings
The Tamuli Trilogy
Used - Very Good
Paperback
HarperCollins Publishers
2015-09-10
592
N/A
Book picture is for illustrative purposes only, actual binding, cover or edition may vary.
This is a used book - there is no escaping the fact it has been read by someone else and it will show signs of wear and previous use. Overall we expect it to be in very good condition, but if you are not entirely satisfied please get in touch with us
Trustpilot