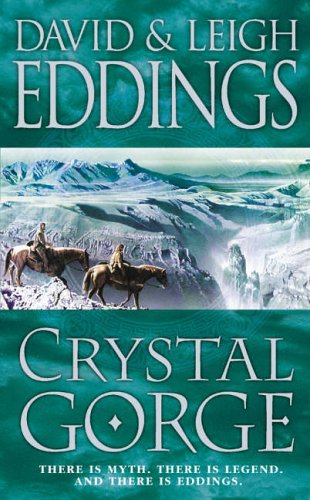 The Dreamers are children teetering on the brink of divinity. They have the power to change the world with their dreams.

The Elder Gods have defeated the Vlagh twice - with the aid of the Dreamers and the mysterious Treasured One who seems, worryingly, to be controlling them - but the unspeakable Creature of the Wasteland is on the fast track to world domination as the time approaches for the Younger Gods to take their place.

Now all the varied resources of the domains of the Gods are marshalled to bring a halt to the spread of evil. But there is pestilence and skirmishing, and suddenly the balance of power shifts.

The Ruler of the Wasteland has infiltrated another domain of the Gods, the land of short summers, where bison and deer roam. There the strange and marvellous crystal gorge, which can be no natural formation of rock, is destined to become a battleground of great beauty and great terror.

The enemy is closer to knowing the secrets of the Treasured One and the Dreamers are in grave danger of delivering a nightmare to the world of the Elder Gods.

'My ideal summer read... Having enjoyed the entire ten-book serial, I was delighted to be able to read this latest addition as it not only provides fantastic escapism in itself, but, being a prequel, will make my re-reading of the other books all the more fascinating.'
The Irish Times

'All the verve and pace we've come to expect.'
The Dark Side

'Offers an absorbing storyline and some memorable characters as, once again, the author touches all the right fantasy bases, with warring gods, political intrigues, supernatural creatures and appealingly human magicians involved in a titanic war over the course of seven millennia. Eddings fans will no doubt snatch this novel off the shelves while readers new to the authors'
world won't find a more appropriate place to begin exploring it.'
Publishers Weekly

'There's no denying Eddings'
offerings do entertain. This novel is for fantasy fans fed up with more fusty fare, or for anyone who likes mischief and merriment.'
West Australian

David Eddings was born in Washington State in 1931 and grew up near Seattle. He graduated from the University of Washington and went on to serve in the US Army. Subsequently he worked as a buyer for the Boeing company and taught college-level English. His first novel was a contemporary adventure, but he soon began a spectacular career as a fantasy writer with his bestselling series The Belgariad.

GOR001316296
9780007157662
0007157665
Crystal Gorge by David Eddings
David Eddings
Used - Very Good
Paperback
HarperCollins Publishers
20060502
400
N/A
Book picture is for illustrative purposes only, actual binding, cover or edition may vary.
This is a used book - there is no escaping the fact it has been read by someone else and it will show signs of wear and previous use. Overall we expect it to be in very good condition, but if you are not entirely satisfied please get in touch with us
Trustpilot