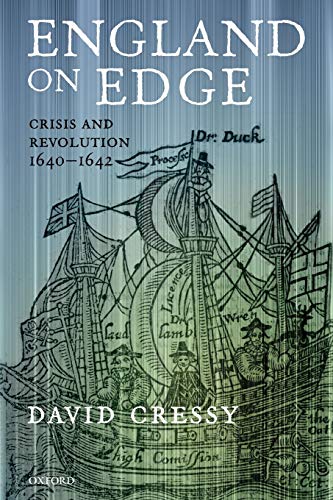 England on Edge traces the collapse of the government of Charles I, the disintegration of the established church, and the cultural panic that led to civil war. Focused on the years 1640-1642, the book features hundreds of people not normally seen in historical surveys, appearing in a drama much larger than the struggle of king and parliament.

England on Edge deals with the collapse of the government of Charles I, the disintegration of the Church of England, and the accompanying cultural panic that led to civil war. Focused on the years 1640 to 1642, it examines stresses and fractures in social, political, and religious culture, and the emergence of an unrestrained popular press. Hundreds of people not normally seen in historical surveys make appearances here, in a drama much larger than the struggle of king and parliament. Historians commonly assert that royalists and parliamentarians parted company over issues of principle, constitutional scruples, and religious belief, but a more complex picture emerges from the environment of anxiety, mistrust, and fear. Rather than seeing England's revolutionary transformation as a product of the civil war, as has been common among historians, David Cressy finds the world turned upside down in the two years preceding the outbreak of hostilities. The humbling of Charles I, the erosion of the royal prerogative, and the rise of an executive parliament were central features of the revolutionary drama of 1640-1642. The collapse of the Laudian ascendancy, the splintering of the established church, the rise of radical sectarianism, and the emergence of an Anglican resistance all took place in these two years before the beginnings of bloodshed. The world of public discourse became rapidly energized and expanded, in counterpoint with an exuberantly unfettered press and a deeply traumatized state. These linked processes, and the disruptive contradictions within them, made this a time of shaking and of prayer. England's elite encountered multiple transgressions, some more imagined than real, involving lay encroachments on the domain of the clergy, lowly intrusions into matters of state, the city clashing with the court, the street with institutions of government, and women undermining the territories of men. The simultaneity, concatenation, and cumulative, compounding effect of these disturbances added to their ferocious intensity, and helped to bring down England's ancien regime. This was the revolution before the Revolution, the revolution that led to civil war.
Few have trawled the archives with so fine a net and Cressy's account must command respect. All students of the 1640s will want to read his book. * John Spurr, Welsh History Review *
Cressy's objective is to describe what actually happened during these two contentious years before England divided in civil war ... He approaches the task with immense determination and thoroughness. He exploits every possible source of evidence intelligently and imaginatively ... His flair for choosing the apposite quotation and the telling anecdote never deserts him, and the result is a vividly compelling picture of a country collapsing into chaos. * David Underdown, H-Albion *
An invaluable resource for any reader interested in this period. The picture Cressy presents is not only rich, but is sure to stir further controversy about the nature of England's "troubles". * Sarah Waurechen, Canadian Journal of History *
Meticulously researched and immensely readable. * Ted Vallance, H-Ideas *
Coherent, sophisticated, and thorough [Cressy's] work not only allows a crucial entry into the scholarship he practises but also points to significant implications for early modern scholars in general. * Matthew McIntyre, Sixteenth Century Journal *
PART I: CAROLINE DISTEMPERS ; 1. Crisis and Revolution ; 2. The Pulse of the Kingdom: Distempers of the Times ; 3. Life and Death amidst Distraction and Fears ; 4. Insolencies of the Army: Soldiers and Civilians 1640-1642 ; 5. The People's Fury, the Lambeth Disturbances, and the Insurrection of May 1640 ; PART II: THE GREAT AFFAIRS OF THE CHURCH ; 6. The Laudian Ascendancy ; 7. Laudian Authority Undermined ; 8. Babylon is Fallen ; 9. Parish Turmoils ; 10. Swarms of Sectaries ; 11. Conservative Reactions: The Laudians Fight Back ; PART III: THE NATIONAL CONVERSATION ; 12. The Press Overpressed ; 13. News of High Distractions ; 14. Discourse, Opinion, and the Making of a Revolutionary Culture ; 15. Libels, Satire, and Derison ; 16. The Social Order Threatened ; PART IV: THE ONSET OF CIVIL WAR ; 17. Tumults and Commotions ; 18. Death's Harbinger: The Drift to Civil War ; Postscript: Why the English Revolution Matters ; Index
NLS9780199237630
9780199237630
0199237638
England on Edge: Crisis and Revolution 1640-1642 by David Cressy (Professor of History, Ohio State University)
David Cressy (Professor of History, Ohio State University)
New
Paperback
Oxford University Press
2007-10-18
464
N/A
Book picture is for illustrative purposes only, actual binding, cover or edition may vary.
This is a new book - be the first to read this copy. With untouched pages and a perfect binding, your brand new copy is ready to be opened for the first time
Trustpilot