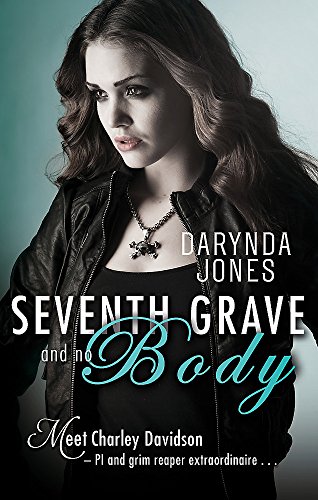 Seventh Grave and No Body by Darynda Jones

It's lucky number seven for Darynda Jones in her bestselling Charley Davidson series! Following up from Sixth Grave on the Edge, Charley's back and she's ready to reap . . .

Seventh Grave and No Body by Darynda Jones

It's lucky number seven for Darynda Jones in her bestselling Charley Davidson series! Following up from Sixth Grave on the Edge, Charley's back and she's ready to reap . . .

Lead me not into temptation.
Follow me instead! I know a shortcut!
--T-shirt

Twelve. Twelve of the deadliest beasts ever forged in the fires of hell have escaped, and they want nothing more than to rip out Charley Davidson's jugular and serve her body to Satan for dinner. So there's that. But Charley has more on her plate than a mob of testy hellhounds. For one thing, her father has disappeared, and as she retraces his last steps she learns he was conducting an investigation of his own, one that has Charley questioning everything she's ever known about him. Add to that an ex-BFF who is haunting her night and day, a rash of suicides that has authorities baffled, and a drop-dead sexy fiance who has attracted the attentions of a local celebrity, and Charley is not having the best week of her life. But all of that barely scratches the surface of her problems . . .

Recent developments have forced her to become a responsible adult. To conquer such a monumental task, she's decided to start small. Really small. She gets a pet. But how can she save the world against the forces of evil when she can't even keep a goldfish alive?

A tad north of hell, a hop, skip, and a jump past the realm of eternity is a little place called Earth, and Charley Davidson, grim reaper extraordinaire, is determined to do everything in her power to protect it.

Darynda Jones's writing has won her several awards, including a 2009 Golden Heart in the Paranormal Category for First Grave On The Right and the 2012 RITA awards for Best New Book. She lives in New Mexico, with her husband of more than 25 years and two sons.
GOR006352054
9780349403434
0349403430
Seventh Grave and No Body by Darynda Jones
Darynda Jones
Charley Davidson
Used - Very Good
Paperback
Little, Brown Book Group
2014-10-21
336
N/A
Book picture is for illustrative purposes only, actual binding, cover or edition may vary.
This is a used book - there is no escaping the fact it has been read by someone else and it will show signs of wear and previous use. Overall we expect it to be in very good condition, but if you are not entirely satisfied please get in touch with us
Trustpilot