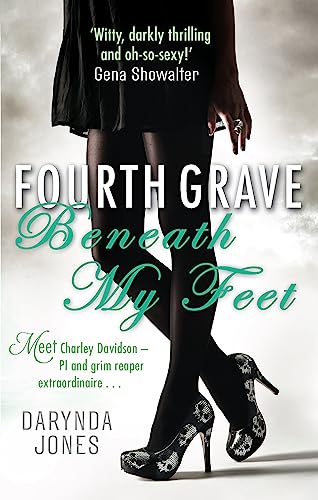 Fourth Grave Beneath My Feet by Darynda Jones

Fourth Grave Beneath My Feet: Number 4 in series by Darynda Jones

Sometimes being the grim reaper really is, well, grim. And since Charley's last case went so awry, she has taken a couple of months off to wallow in the wonders of self-pity. But when a woman shows up on her doorstep, convinced someone is trying to kill her, Charley has to pull herself together.

In the meantime, the sexy, sultry son of Satan, Reyes Farrow, is out of prison and out of Charley's life, as per her wishes and several perfectly timed death threats. But his absence has put a serious crimp in her sex life. While there are other things to consider, like the fact that the city of Albuquerque has been taken hostage by an arsonist, Charley is having a difficult time staying away. Especially when it looks like Reyes may be involved.

Just when life was returning to normal, Charley is thrust back into the world of crime, punishment and the devil in blue jeans in this hilarious fourth instalment in the New York Times bestselling series.

The madcap supernatural romp is sharp and edged with emotional tension and drama, all of which make it well worth your time and money * Romantic Times *
Darynda Jones's writing has won her several awards, including a 2009 Golden Heart in the Paranormal Category for First Grave On The Right and the 2012 RITA for Best First Book. She lives in New Mexico, with her husband of more than 25 years and two sons.
GOR011068524
9780749959173
0749959177
Fourth Grave Beneath My Feet: Number 4 in series by Darynda Jones
Darynda Jones
Charley Davidson
Used - Like New
Paperback
Little, Brown Book Group
2013-01-03
320
N/A
Book picture is for illustrative purposes only, actual binding, cover or edition may vary.
The book has been read, but looks new. The book cover has no visible wear, and the dust jacket is included if applicable. No missing or damaged pages, no tears, possible very minimal creasing, no underlining or highlighting of text, and no writing in the margins
Trustpilot