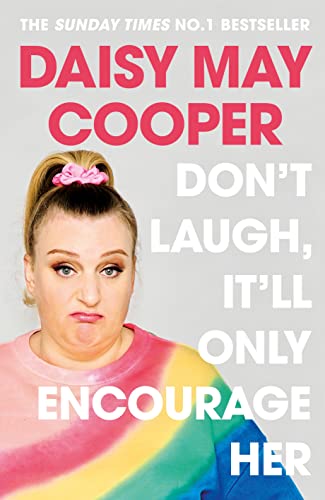 Don't Laugh, It'll Only Encourage Her by Daisy May Cooper

Don't Laugh, It'll Only Encourage Her by Daisy May Cooper

Discover the funniest memoir of 2021, written by the most relatable woman in the world - Daisy May Cooper, creator and star of BBC's award-winning comedy This Country

'Brilliant. A joy and a delight - I laughed out loud! An absolute cracker' ZOE BALL
'Thank goodness for gloriously silly Daisy May Cooper. Joyful, irreverent and totally uplifting' THE TIMES
'The funniest woman on TV' GUARDIAN
_______

'When I'm up on stage, I don't want to be anywhere else in the world'

Since I was little, I've had a cast of characters living inside my head, an over-active imagination and the urge to be a massive f**king show-off. Not only was my family completely insane, but we grew up battling rural poverty, and together with my brother Charlie, I staggered my way through adolescence like a p**sed-up butterfly.

In Don't Laugh, It'll Only Encourage Her, I'll take you on a rollercoaster ride so extreme it'll make you laugh, then cry, then barf your guts up.

From my misspent childhood skulking around car boot sales to reimagining WWE Smackdowns for a Cirencester audience; from my one-armed internet boyfriend to a lover who doubled as a coat-stand; from snogging a pole at a lap-dancing audition to imitating a warthog at RADA to finally having This Country commissioned by the BBC.

Can wall plaster be part of your five-a-day?
Can the afterlife be found in the back of a sh**ty pub?
How do you give your tits added drama?
Who dropped the monster turd at the fake audition?
How much of a humiliating, ridiculous, screw-up of a sh**-storm life do you need to have led before you finally achieve your dream . . . ?

Brilliant. A joy and a delight - I laughed out loud! An absolute cracker -- Zoe Ball

Daisy May Cooper is an award-winning comedy actress and writer. She won the BAFTA TV Award for Best Female Comedy Performance in 2018 for her role as Kerry Mucklowe in the BBC Three series This Country, a mockumentary-style show about the eccentricities of life in rural England, which she co-created and co-wrote with her brother, Charlie Cooper. This Country has also won multiple BAFTA awards.

She recently starred in Armando Iannucci's The Personal History of David Copperfield, and has featured on TV shows including Avenue 5, Doc Martin and The Wrong Mans.

GOR011832407
9780241503584
0241503582
Don't Laugh, It'll Only Encourage Her by Daisy May Cooper
Daisy May Cooper
Used - Very Good
Hardback
Penguin Books Ltd
2021-10-28
432
N/A
Book picture is for illustrative purposes only, actual binding, cover or edition may vary.
This is a used book - there is no escaping the fact it has been read by someone else and it will show signs of wear and previous use. Overall we expect it to be in very good condition, but if you are not entirely satisfied please get in touch with us
Trustpilot