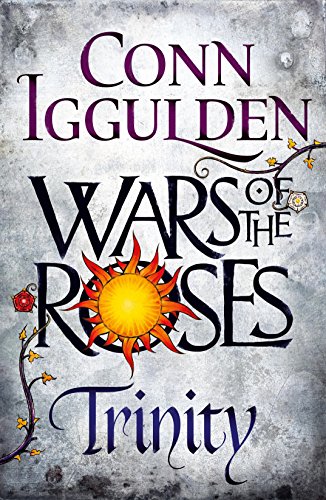 Wars of the Roses: Trinity by Conn Iggulden

Wars of the Roses: Trinity: Book 2 by Conn Iggulden

The brilliant retelling of the Wars of the Roses continues with Trinity, the second gripping novel in the new series from historical fiction master, Conn Iggulden.

1454: King Henry VI has remained all but exiled in Windsor Castle, struck down by his illness for over a year, his eyes vacant, his mind a blank.

His fiercely loyal wife and Queen, Margaret of Anjou, safeguards her husband's interests, hoping that her son Edward will one day know the love of his father.

Richard Duke of York, Protector of the Realm, extends his influence throughout the kingdom with each month that Henry slumbers. The Earls of Salisbury and Warwick make up a formidable trinity with Richard, and together they seek to break the support of those who would raise their colours in the name of Henry and his Queen.

But when the King unexpectedly recovers his senses and returns to London to reclaim his throne, the balance of power is once again thrown into turmoil.

The clash of the Houses of Lancaster and York will surely mean a war to tear England apart . . .

Following on from Stormbird, Trinity is the second epic instalment in master storyteller Conn Iggulden's new Wars of the Roses series. Fans of Game of Thrones and The Tudors will be gripped from the word go.

'Pacey and juicy, and packed with action' Sunday Times

'A novel that seamlessly combines narrative, historical credence and great knowledge of the period' Daily Express

'A page-turning thriller' Mail on Sunday

'Superbly plotted and paced' The Times

Conn Iggulden is one of the most successful authors of historical fiction writing today. Following on from Stormbird, the Sunday Times best-seller, Trinity is the second book in his superb new series set during the Wars of the Roses, a remarkable period of British history. His previous two series, on Julius Caesar and on the Mongol Khans of Central Asia, describe the founding of the greatest empires of their day and were number one bestsellers. Conn Iggulden lives in Hertfordshire with his wife and children.

Iggulden is in a class of his own when it comes to epic, historical fiction * Daily Mirror *
Superbly plotted and paced * Times *
Conn breathes new life into the darkest and most dramatic of times, with a flair for both the huge scale and human interest of it all * Star *
Exceptionally well-written and gripping * Stylist *
Compelling reading * Woman and Home *
A page-turning thriller * Mail on Sunday *
Pacey and juicy, and packed with action * Sunday Times *
Conn Iggulden is one of the most successful authors of historical fiction writing today. He has written three previous bestselling historical series, including Wars of the Roses. Dunstan is a stand-alone novel set in the red-blooded world of tenth-century England, and The Falcon of Sparta is a stand-alone in which Iggulden returns to the Ancient World. The Gates of Athens, his latest book, is first in the new Athenian series.
GOR006196112
9780718159863
0718159861
Wars of the Roses: Trinity: Book 2 by Conn Iggulden
Conn Iggulden
The Wars of the Roses
Used - Very Good
Paperback
Penguin Books Ltd
2014-09-24
512
N/A
Book picture is for illustrative purposes only, actual binding, cover or edition may vary.
This is a used book - there is no escaping the fact it has been read by someone else and it will show signs of wear and previous use. Overall we expect it to be in very good condition, but if you are not entirely satisfied please get in touch with us
Trustpilot