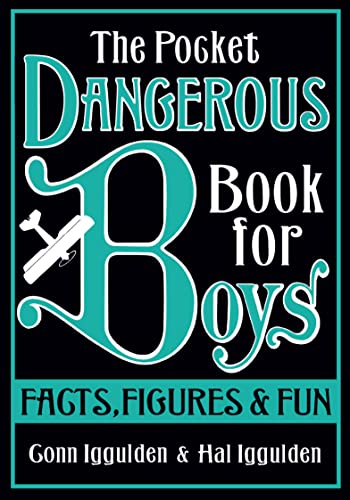 The Pocket Dangerous Book for Boys by Conn Iggulden

The Pocket Dangerous Book for Boys: Facts, Figures and Fun by Conn Iggulden

'The Dangerous Book for Boys' was the book of the year in 2006 and 2007, inspiring a newfound passion for adventure, fun and all things 'dangerous'. Now the authors have brought together all their facts: fun and frivolous, entertaining and useful, into a 'Pocket Dangerous Book for Boys: Facts, Figures and Fun.

Ever wanted to know what the best ever scientific discoveries were? Or the most gruesome deaths of all time? How namy great men were assassinated? What were the pivotal moments of the last century? Facts, Figures and Fun is crammed with odd, interesting, facts which eveyr boy should know.

Praise for The Dangerous Book for Boys

'The perfect handbook for boys and dads' Daily Telegraph

'Full of tips on how to annoy your parents' Evening Standard

'An old-fashioned compendium of information on items such as making catapults and knot-tying...the end of the PlayStation may have been signalled' The Times

'If you want to know how to make crystals, master NATO's phonetic alphabet...and build a workbench, look no further' Time Out

Born in London, Conn Iggulden read English at London University and worked as a teacher for seven years before becoming a full-time writer. He lives in Hertfordshire with his wife and children. Conn Iggulden is the author of the number one bestselling Emperor series and now the bestselling Conqueror series. Hal Iggulden was born in 1972. He lives in Leicester and is a theatre director with a love of astronomy, gadgets, dogs and football.

CIN000776451
9780007284726
0007284721
The Pocket Dangerous Book for Boys: Facts, Figures and Fun by Conn Iggulden
Conn Iggulden
Used - Very Good
Hardback
HarperCollins Publishers
2008-10-01
192
N/A
Book picture is for illustrative purposes only, actual binding, cover or edition may vary.
This is a used book - there is no escaping the fact it has been read by someone else and it will show signs of wear and previous use. Overall we expect it to be in very good condition, but if you are not entirely satisfied please get in touch with us
Trustpilot