The Gates of Athens Conn Iggulden 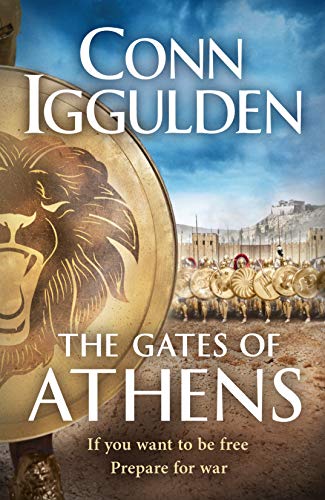 The Gates of Athens by Conn Iggulden

The Gates of Athens: Book One of Athenian by Conn Iggulden

On the plains of Marathon an army of slaves gathers . . .

Under Darius the Great, King of Kings, the mighty Persian army - swollen by 10,000 Immortal warriors - have come to subjugate the Greeks. In their path, vastly outnumbered, stands an army of freeborn Athenians, and among them is clever, fearsome and cunning soldier-statesman, Xanthippus.

Yet people soon forget that freedom is bought with blood.

Ten years later, Xanthippus watches helplessly as Athens succumbs to the bitter politics of factionalism. Traitors and exiles abound. Trust is at a low ebb. Which is when the Persians cross the Hellespont in ever greater numbers to raze Athens to the ground.

Facing overwhelming forces by land and sea, the Athenians call on their Spartan allies for assistance - to delay the Persians at the treacherous pass of Thermopylae . . .

Featuring two of the most famous battles of the Ancient World - the Battle of Marathon and the Last Stand at Thermopylae - The Gates of Athens is a bravura piece of storytelling in which a people, driven to preserve their freedom at any cost, committed acts both base and noble.

Readers are raving about The Gates of Athens:

'What a brilliantly addictive read'

'This author never fails to deliver!'

'Another brilliant historical novel from the master of the craft'

'The pace is nail-biting and the set-dressing magnificent' Times

'One of our finest historical novelists' Daily Express

'Iggulden is in a class of his own when it comes to epic, historical fiction' Daily Mirror

Thrilling retelling . . . It's a brilliant read, and his description of the Battle of Thermopylae is simply a stunning - and inspiring - piece of writing * Cotswold Life *
Praise for Conn Iggulden * - *
An absolutely cracking story. The pace is nail-biting and the set dressing magnificent * The Times *
Absorbing and bloody -- Antonia Senior
Peopled with characters so finely honed the story becomes a gripping and glorious legend. Brilliant! * Weekend Sport *
Breathes new life into the darkest and most dramatic of times * Star *
Conn Iggulden is one of the most successful authors of historical fiction writing today. He has written three previous bestselling historical series, including Wars of the Roses. Dunstan is a stand-alone novel set in the red-blooded world of tenth-century England, and The Falcon of Sparta is a stand-alone in which Iggulden returns to the Ancient World. The Gates of Athens, his latest book, is first in the new Athenian series.
GOR010680020
9780241351239
0241351235
The Gates of Athens: Book One of Athenian by Conn Iggulden
Conn Iggulden
Used - Very Good
Hardback
Penguin Books Ltd
2020-08-06
464
N/A
Book picture is for illustrative purposes only, actual binding, cover or edition may vary.
This is a used book - there is no escaping the fact it has been read by someone else and it will show signs of wear and previous use. Overall we expect it to be in very good condition, but if you are not entirely satisfied please get in touch with us
Trustpilot