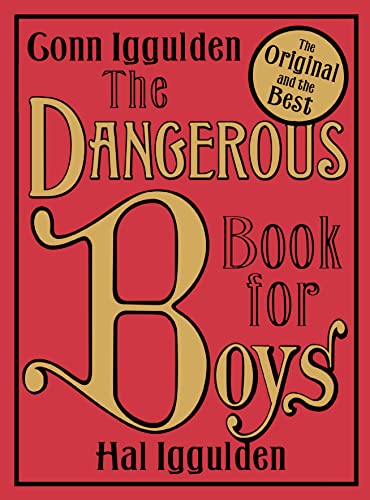 The Dangerous Book for Boys by Conn Iggulden

INSPIRATION FOR THE TV SHOW

If ever there were a book to make you switch off your television set, The Dangerous Book for Boys is it.

The Dangerous Book for Boys by Conn Iggulden

INSPIRATION FOR THE TV SHOW

If ever there were a book to make you switch off your television set, The Dangerous Book for Boys is it.

How many other books will help you thrash someone at conkers, race your own go-cart, and identify the best quotations from Shakespeare? The Dangerous Book for Boys gives you facts and figures at your fingertips - swot up on the solar system, learn about famous battles and read inspiring stories of incredible courage and bravery. Teach your old dog new tricks. Make a pinhole camera. Understand the laws of cricket. There's a whole world out there: with this book, anyone can get out and explore it.

The Dangerous Book for Boys is written with the verve and passion that readers of Conn Iggulden's number one bestselling novels have come to expect. This book, his first non-fiction work, has been written with his brother as a celebration of the long summers of their youth and as a compendium of information so vital to men of all ages. Lavishly designed and fully illustrated in colour and black and white throughout, it's set to be a perfect gift for Father's Day and beyond.

Praise for 'The Dangerous Book for Boys'

'The perfect handbook for boys and dads.' Daily Telegraph

'Full of tips on how to annoy your parents'. Evening Standard

'An old-fashioned compendium of information on items such as making catapults and knot-tying...the end of the PlayStation may have been signalled.' The Times

'If you want to know how to make crystals, master NATO's phonetic alphabet...and build a workbench, look no further.' Time Out

Born in London, Conn Iggulden read English at London University and worked as a teacher for seven years before becoming a full-time writer. He lives in Hertfordshire with his wife and children. Conn Iggulden is the author of the number one bestselling Emperor series. Hal Iggulden was born in 1972. He lives in Leicester and is a theatre director with a love of astronomy, gadgets, dogs and football.

GOR000912924
9780007232741
0007232748
The Dangerous Book for Boys by Conn Iggulden
Conn Iggulden
Used - Very Good
Hardback
HarperCollins Publishers
2006-06-05
304
Winner of British Book Awards: Book of the Year 2007 Short-listed for Independent Booksellers' Week Book of the Year Award: Adults' Book of the Year 2007
Book picture is for illustrative purposes only, actual binding, cover or edition may vary.
This is a used book - there is no escaping the fact it has been read by someone else and it will show signs of wear and previous use. Overall we expect it to be in very good condition, but if you are not entirely satisfied please get in touch with us
Trustpilot