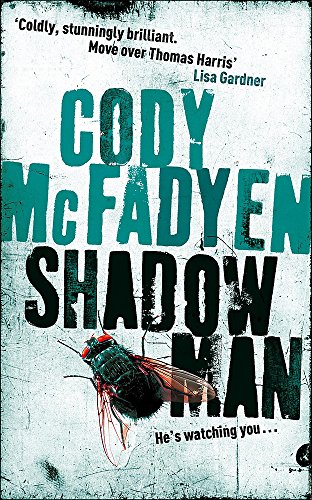 Shocking, heart-wrenching and electrifyingly suspenseful, SHADOW MAN is the most stunning debut thriller for years.

FBI agent Smoky Barrett is no stranger to the darker recesses of the human mind. But nothing could have prepared her for the day she had to watch her husband and daughter die at the hands of a serial killer. She bears the scars, mental and physical.

Most people would run - from work, from life, from everything associated with the pain of a shattered existence. But Smoky doesn't know how to run - and when the job that has defined her life comes calling once again with the news that her best friend from high school has been brutally murdered, she finds herself back in the firing line, chasing a hidden killer who will stop at nothing to confront her.

Terrifically good, terrifically scary . . . very hard to put down * San Francisco Chronicle *
'This disturbing serial killer drama set in California marks a promising debut for McFadyen, who combines many conventions of the genre but with far more exquisite, intricate results than the norm. FBI agent Smoky Barrett, a haunted, complicated woman, leads a team of investigators assigned to a serial killer task force. Barrett, who escaped the clutches of a different serial killer a year earlier but lost her husband and daughter in the attack, is now tracking a madman known as "Jack Jr.," who believes he's a descendant of Jack the Ripper. He mauls women, mostly prostitutes with Web sites, then sends the videotapes of the killings to Barrett and her crew. The plot follows a typical arc, complete with some nauseating details and predictable twists. There's also a romance between Barrett and a bodyguard that seems tacked on for future installments. Yet McFadyen's writing is crisp and smart, and his scenes pack a visceral punch without being cheap or exploitative. Barrett, for her part, * Publishers Weekly *
'More twists than a bucketful of corkscrews and more gore than an abattoir on overtime...fantastic' * Kino News, Singapore *
SHADOW MAN grabs you by the throat and yanks you along for a hell of a scary ride. A spellbinding read from first page to last. * Faye Kellerman *
Coldly, stunningly brilliant. Move over Thomas Harris, Mcfadyen has brought a new game to town. * Lisa Gardner *
Really gets under your skin...sophisticated...makes Hannibal Lecter look more of a pussycat than a predator...best read on an empty stomach * Peterborough Evening Telegraph *
'Promising, pacy debut' * Bournemouth Daily Echo *
As humane as it is violent...Barrett's anger, pain and determination infuse the novel with a raw passion...it will be among the best crime fiction you will read this year * Washington Post *
A thriller which reaches down into elemental terror * Bolton Evening News *
The wildest night ride I have been on for quite a while...By the time you finish reading this book you'll be running on adrenalin you never knew you had. If you're sick of books about serial killers, SHADOW MAN is the cure. Mcfadyen's writing and characterization run long, deep and true. And, by the way, he is beyond scary. Not to be missed * Bookreporter.com *
Authentic...handled well with some unexpected twists and turns. Mcfadyen has drawn Barrett and her fellow FBI members tenderly and intricately * Shots Magazine *
'Hannibal Lecter could learn lessons in evil from the killer in this American bestseller' * Peterborough Evening Telegraph *
SHADOW MAN is one of the most powerful and authentic portrayals of a serial killer and the people who hunt them I have ever read. It kept me riveted right to the last page. Cody Mcfadyen is the real thing. * John Douglas, author of the #1 bestseller MINDHUNTER: Inside the F.B.I.'s Serial Crime Unit *
Disturbing ... a promising debut for Mcfadyen, who combines many conventions of the genre but with far more exquisite, intricate results than the norm . . . Pack[s] a visceral punch * Publishers Weekly *
A truly talented author * The Sunday Times, Australia *
I'm still reeling after reading this high-octane, heart-pumping FBI thriller...Brilliant. But not for the squeamish * ****Good Reading, Australia *
This is one of the best serial killer novels that I've read. It's up there with the early Patricia Cornwell novels, Primal Fear and The Silence of the Lambs - a stunning first novel * Manly Daily *
Mcfadyen has managed to deliver something fresh. His style of narration sucks the reader in from the first sentence and the story has enough plot twists to keep you intrigued to the last page. A superb debut novel, hopefully a sign of things to come from a truly talented author. In a word: chilling * Herald Sun, Australia *
If you like to be scared so witless you hold your breath for pages at a time, SHADOW MAN won't disappoint * New Idea, Australia *
This is a terrifically good, terrifically scary serial-killer story set in San Francisco and Los Angeles. The world of SHADOW MAN arrives fully formed, as if we're at the second or third installment of a well-established series. The novel's protagonist, FBI agent Smoky Barrett, is scarred and traumatized at the outset from a past encounter with a murderous psychopath -- a run-in that resulted in the deaths of her husband and young daughter. Now she has another nut on her hands. * San Francisco Chronicle *
Cody Mcfadyen is an independent video games designer. He lives in California with his wife and their daughter.
GOR000275563
9780340840078
0340840072
Shadow Man: Smoky Barrett, Book 1 by Cody Mcfadyen
Cody Mcfadyen
Used - Very Good
Paperback
Hodder & Stoughton General Division
2007-02-01
480
N/A
Book picture is for illustrative purposes only, actual binding, cover or edition may vary.
This is a used book - there is no escaping the fact it has been read by someone else and it will show signs of wear and previous use. Overall we expect it to be in very good condition, but if you are not entirely satisfied please get in touch with us
Trustpilot