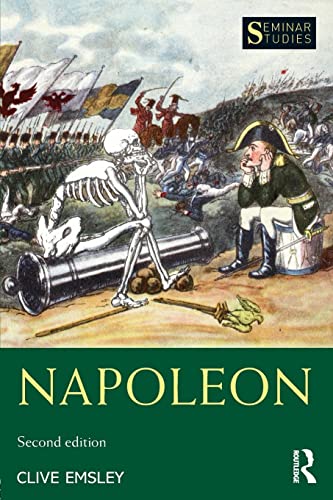 "Almost two centuries after the death of Napoleon, historians continue to argue about his aims, his achievements and his legacy. This book provides an introduction to the life and career of Napoleon as well as the historical debates surrounding him. In this updated new edition, Clive Emsley broadens his study to include the debate on the cultural and social impact of the Napoleonic era"--

Napoleon had a profound impact on the development of both France and Europe, and his career had repercussions across the wider world. His career had all the elements of a classical tragedy: having begun with spectacular military and civil achievements, it ended in exile on the tiny Atlantic island of St Helena.

Almost two centuries after Napoleon's death, historians continue to argue about his aims, his achievements and his legacy. In this thoroughly revised and updated new edition, Clive Emsley brings these historiographical debates up-to-date, and broadens his study to include discussion of the cultural and social impact of the Napoleonic era.

A Chronology, Glossary and Who's Who of key characters are also provided, making this an indispensable textbook for students of nineteenth-century French and European history.

Clive Emsley is Professor Emeritus of History at the Open University. He is co-editor of the Seminar Studies series. Among his publications are The Longman Companion to Napoleonic Europe (1993) and Gendarmes and the State in Nineteenth-Century Europe (1999).

Part One: Introduction 1. 'My History is made up of facts, and words alone cannot destroy them' Part Two: Narrative and Analysis 2. The Career and the Man 3. Reorganising France 4. Reorganising Europe Part Three: Assessment 5. The Legacy Part Four: Documents Part Five: Glossary, Maps, Who's Who, Bibliography

GOR012186030
9781138777026
1138777021
Napoleon: Conquest, Reform and Reorganisation by Clive Emsley (Open University, UK)
Clive Emsley (Open University, UK)
Seminar Studies
Used - Well Read
Paperback
Taylor & Francis Ltd
2014-10-27
150
N/A
Book picture is for illustrative purposes only, actual binding, cover or edition may vary.
This is a used book. We do our best to provide good quality books for you to read, but there is no escaping the fact that it has been owned and read by someone else previously. Therefore it will show signs of wear and may be an ex library book
Trustpilot