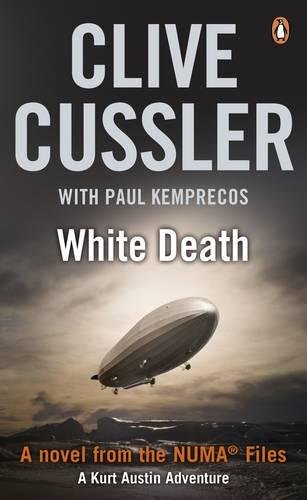 When a confrontation between a radical environmental group and a Danish cruiser off the Faroe Islands sinks a ship, trapping her crew beneath the waves, Kurt Austin of NUMA is called to the rescue. Investigating the collision, Austin uncovers a trail of sabotage that leads to a sinister multinational corporation seeking control of the waves.

When a confrontation between a radical environmental group and a Danish cruiser off the Faroe Islands sinks a ship, trapping her crew beneath the waves, Kurt Austin of NUMA is immediately called to the rescue. Investigating the collision, Austin uncovers a trail of sabotage that leads to a sinister multinational corporation seeking control of the waves. When he is almost killed for his trouble, Austin knows that this is one organization that will let nothing stand in its way. But with an environmental disaster underway, the clock is ticking for Austin and the NUMA team...

Filled with heart-stopping adventure and endless imagination, White Death is an exceptional thriller from a writer at the height of his powers.

Clive Cussler, author of the best-selling Dirk Pitt novels Arctic Drift and The Treasure of Khan, and co-author Paul Kemprecos navigate a treacherous sea of sabotage and conspiracy in White Death, the fourth novel of the action-packed NUMA Files series. Lost City and Polar Shift are the fifth and sixth.

'The guy I read' Tom Clancy

Bestselling author Clive Cussler has kept readers on the edges of their seats for four decades with his thrilling action novels. As well as the NUMA Files series there are also the Oregon Files, the Dirk Pitt stories (which started it all), the Isaac Bell adventures and the Fargo series. The other titles in the NUMA files series are: Serpent, Blue Gold, Fire Ice, Lost City, Polar Shift, The Navigator, Medusa, Devil's Gate, and The Storm.

All-action narrow escapes and the kind of unrelenting plot tension that has won Cussler hundreds of millions of fans worldwide Observer
Clive Cussler (Author)
Clive Cussler is the author and co-author of a great number of international bestsellers, including the famous Dirk Pitt (R) adventures, such as Celtic Empire; the NUMA (R) Files adventures, most recently The Rising Sea; the Oregon Files, such as Shadow Tyrants; the Isaac Bell historical thrillers, which began with The Chase; and the recent Fargo Adventures which lastly included The Oracle. He lives in Arizona.

Paul Kemprecos (Author)
Paul Kemprecos has co-authored all of the NUMA (R) Files novels with Clive Cussler and is a Shamus Award-winning author of six underwater detective thrillers. He lives on Cape Cod, Massachusetts.

GOR000420769
9780140297379
0140297375
White Death: NUMA Files #4 by Clive Cussler
Clive Cussler
The NUMA Files
Used - Very Good
Paperback
Penguin Books Ltd
2004-03-18
528
N/A
Book picture is for illustrative purposes only, actual binding, cover or edition may vary.
This is a used book - there is no escaping the fact it has been read by someone else and it will show signs of wear and previous use. Overall we expect it to be in very good condition, but if you are not entirely satisfied please get in touch with us
Trustpilot