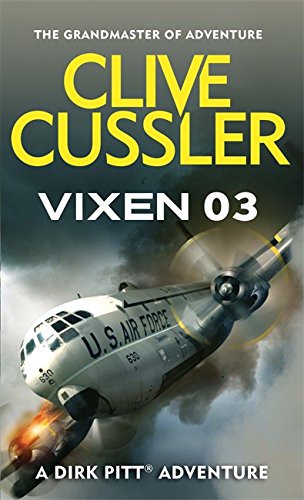 Over thirty years ago, on an ultra-secret flight to the South Pacific, the transport plane Vixen 03 vanished. It was believed to be lost at sea. And carrying canisters of the most lethal substance known to man.

Now Vixen 03 has returned to haunt the world. Dirk Pitt, the ace maritime troubleshooter who raised the Titanic, is the only man who can overcome the nightmarish problems involved in retrieving her cargo. And the price of failure is terrifying.

'Clive Cussler is the guy I read' Tom Clancy

For Raise the Titanic!: 'A great adventure thriller which spins from one dizzying climax to another ... Riveting ... simply super and very cleverly done' Publishers Weekly **

Clive Cussler grew up in Alhambra, California. He later attended Pasadena City College for two years, but then enlisted in the Air Force during the Korean War where he served as an aircraft mechanic and flight engineer in the Military Air Transport Service. Upon his discharge, he became a copywriter and later creative director for two leading ad agencies. At that time, he wrote and produced radio and television commercials that won numerous international awards one at the prestigious Cannes Film Festival. He began writing in 1965 and published his first novel featuring Dirk Pitt (R) in 1973.

Clive is the founder of the National Underwater & Marine Agency, (NUMA) a non-profit organisation that dedicates itself to American maritime and naval history, and a fellow in both the Explorers Club of New York and the Royal Geographic Society in London. He also collects classic automobiles. Clive divides his time between the mountains of Colorado and the deserts of Arizona.

GOR001020200
9780751505894
0751505897
Vixen 03 by Clive Cussler
Clive Cussler
Dirk Pitt
Used - Very Good
Paperback
Little, Brown Book Group
1988-01-01
384
N/A
Book picture is for illustrative purposes only, actual binding, cover or edition may vary.
This is a used book - there is no escaping the fact it has been read by someone else and it will show signs of wear and previous use. Overall we expect it to be in very good condition, but if you are not entirely satisfied please get in touch with us
Trustpilot