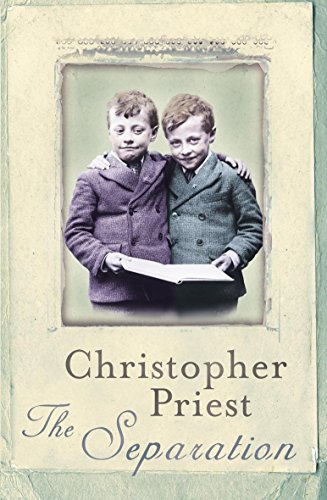 The Separation by Christopher Priest

The Separation by Christopher Priest

THE SEPARATION is the story of twin brothers, rowers in the 1936 Olympics (where they met Hess, Hitler's deputy); one joins the RAF, and captains a Wellington; he is shot down after a bombing raid on Hamburg and becomes Churchill's aide-de-camp; his twin brother, a pacifist, works with the Red Cross, rescuing bombing victims in London. But this is not a straightforward story of the Second World War: this is an alternate history: the two brothers - both called J.L. Sawyer - live their lives in alternate versions of reality. In one, the Second World War ends as we imagine it did; in the other, thanks to efforts of an eminent team of negotiators headed by Hess, the war ends in 1941.

THE SEPARATION is an emotionally riveting story of how the small man can make a difference; it's a savage critique of Winston Churchill, the man credited as the saviour of Britain and the Western World, and it's a story of how one perceives and shapes the past.

[A] subtle, unsettling alternative WWII history from British author Priest. Many alternative history novels are bloodless extrapolations from mountains of data, but this one quietly builds characters you care about - then leaves their dilemmas unresolved as they try to believe that what they have done is "right." * PUBLISHERS WEEKLY starred review *
Himself the father of twins, Priest has embedded dualism and imposture at the very heart of this alternative history in a way that keeps readers constantly questioning what seems to be going on. Churchill and Hess are major characters, but their doubles make more than just cameo appearances, too. Priest is clearly as immersed in the period as his creation Gratton. Throughout a narrative built from diaries, wartime memoirs and official memos, his wartime feel never falters. A complex and enigmatic tale of identity, illusion and deception * GLASGOW HERALD *
Superbly constructed, the prose admirably spare and elegant ... Priest is a powerful and underappreciated writer, and The Separation is a queasily gripping and intelligent work of fiction * DAILY TELEGRAPH *
One cannot help but wonder how many discarded alternative personae litter the multiple paths of one's personal history, or histories, and this, for me, is the most disquieting legacy of this remarkable novel * FOUNDATION *
There have been many novelistic re-creations of the second world war in recent years, but Priest's novel stands head and shoulders above them all ... this book is an astoundingly good piece of fiction: its narrative is gripping, its characters are involving, its prose is resonant, poetic, subtle, its overall effect is thought-provoking, haunting, brilliant ... This book is nothing short of a masterpiece * INFINITY PLUS *
Like Hitchcock's work, The Separation begs for repeated readings to appreciate the cold brilliance and execution of its intricate plot fully. A masterly novel that deserves to become a classic * MAGAZINE OF FANTASY & SCIENCE FICTION *
An astonishing achievement, the sort of novel that in a saner alternate world might well be a candidate for mainstream awards and bestseller lists * LOCUS *
Christopher Priest's novels have built him an inimitable dual reputation as a contemporary novelist and a leading figure in modern SF and fantasy. His novel THE PRESTIGE is unique in winning both a major literary prize (the James Tait Black Award) and a major genre prize (The World Fantasy Award). He was selected for the original Best of Young British Novelists in 1983. He lives in Devon.
GOR001297570
9780575070035
057507003X
The Separation by Christopher Priest
Christopher Priest
S.F. MASTERWORKS
Used - Very Good
Paperback
Orion Publishing Co
2004-02-12
416
Winner of Arthur C. Clarke Award 2003 (UK) Winner of British Science Fiction Association Award for Best Novel 2003 (UK) Short-listed for John W Campbell Award 2003 (UK)
Book picture is for illustrative purposes only, actual binding, cover or edition may vary.
This is a used book - there is no escaping the fact it has been read by someone else and it will show signs of wear and previous use. Overall we expect it to be in very good condition, but if you are not entirely satisfied please get in touch with us
Trustpilot