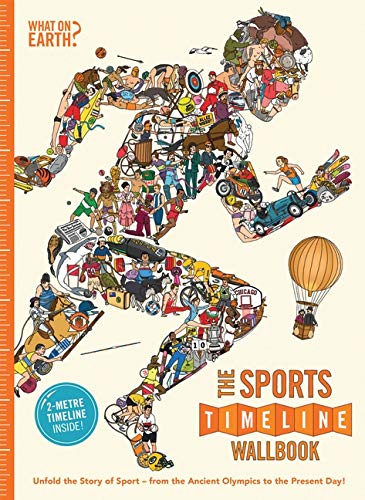 Unfold the spectacular history of sport - from the ancient Olympics to today - with this beautifully illustrated, 2-metre-long timeline! More than 100 different sporting events and over 1,000 pictures and captions tell the unique story of sports in the world. Broken out by type of sport - such as fighting, racing and ball games - as well as by date, the timeline allows readers to trace the origins and histories of all major sports, including Olympic champions and world record holders. An easy-to-read chronicle, written in the form of nearly forty newspaper articles, highlights key moments such as the first Olympic games, Jesse Owens' race wins, and the first documented climbers to summit Mt. Everest. Other features include a page of letters to the editor, a fifty-question quiz, and a pocket magnifier to make it easier to explore all the timeline's details. Perfect for sport lovers of any age!

"Astonishing - perfect for all the family."

Bestselling author Christopher Lloyd began his career as a journalist with the Sunday Times newspaper. Then, while camping with his family, he had a critical realisation: even with a 1st class degree in history from Cambridge University and experience as a science writer, there was so much about the world he didn't know. So, he set out to write books that zoom out and tell the big stories, opening readers' eyes to how seemingly unrelated events fit together and showing them multiple perspectives on the world, all in highly engaging prose and matched with lively illustration and photography. Now, with several books in print, including the bestselling What on Earth Happened? and Absolutely Everything!, Chris divides his time between writing books and delivering lectures and workshops to schools, literary festivals, and a wide range of other venues around the world. He lives in Tonbridge, Kent, UK, with his wife and two adorable terriers.

Brian Oliver is a former Sports Editor of the Observer.

Andy Forshaw graduated in graphic design and illustration from London's Central Saint Martins college, and has worked on numerous online and publishing projects. Since 2010, Andy has created more than 5,000 illustrations for children's books. When not illustrating, Andy can be found exploring the countryside on his bike. He lives in London, UK.

GOR009274594
9780995482005
0995482004
The Sports Timeline Wallbook by Christopher Lloyd
Christopher Lloyd
What on Earth Wallbook Series
Used - Very Good
Hardback
What on Earth Publishing Ltd
2017-02-01
26
N/A
Book picture is for illustrative purposes only, actual binding, cover or edition may vary.
This is a used book - there is no escaping the fact it has been read by someone else and it will show signs of wear and previous use. Overall we expect it to be in very good condition, but if you are not entirely satisfied please get in touch with us
Trustpilot