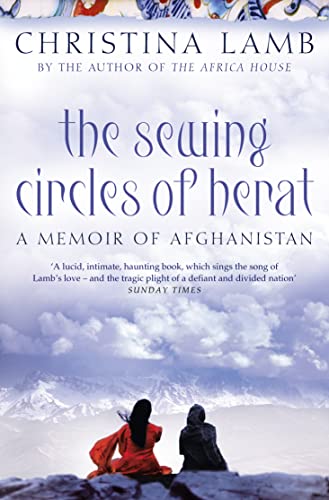 The Sewing Circles of Herat by Christina Lamb

Ten years ago, Christina Lamb reported on the war the Afghan people were fighting against the Soviet Union. Now, back in Afghanistan, she has written an extraordinary memoir of her love affair with the country and its people.

The Sewing Circles of Herat: My Afghan Years by Christina Lamb

Ten years ago, Christina Lamb reported on the war the Afghan people were fighting against the Soviet Union. Now, back in Afghanistan, she has written an extraordinary memoir of her love affair with the country and its people.

Long haunted by her experiences in Afghanistan, Lamb returned there after last year's attack on the World Trade Centre to find out what had become of the people and places that had marked her life as a young graduate.This time seeing the land through the eyes of a mother and experienced foreign correspondent, Lamb's journey brings her in touch with the people no one else is writing about: the abandoned victims of almost a quarter century of war.

'Of all books about Afghanistan, Christina Lamb's is the most revealing and rewarding...a personal, perceptive and moving account of bravery in the face of staggering difficulties.' Anthony Sattin, Sunday Times

'As an account of how Afghanistan got into its present state, and of the making of the grotesque regime of the Taliban, this book could not possibly be bettered. Brilliant.' Matthew Leeming, Spectator

'Lamb's book combines a love of Afghanistan with a fearless search for the human stories behind the past twenty-three years of war...Her book is not only a necessary education for the Western reader in the political warring that generated the torture, murder and poverty, but also a stirring lament for the country of ruins that was once better known for its poetry and mosques.' James Hopkin, The Times

'"The Sewing Circles of Herat" opens a window on to the deeply unromantic horrors of Taliban-led Afghanistan and, less troubling for the squeamish, tells the remarkable stories of those who dared to defy that particularly vile regime...Lamb writes with pace, conviction and honesty, uncovering both the terrible human cost of the Taliban experiment and the enduring strength of spirit of those who refused to join it.' Justin Marozzi, Sunday Telegraph

'Award-winning foreign correspondent Christina Lamb has written an inspiring and moving account of Afghanistan's plight...Lamb shows that, despite attempts to destroy the country and its culture, its soul remains uncrushed.' Marianne Brace, Independent on Sunday

'A lucid, intimate, haunting book, which sings the song of Lamb's love - and the tragic plight of a defiant and divided nation.' Sunday Times

Christina Lamb is one of Britain's leading foreign correspondents and a bestselling author. She has won 14 major awards including five times being named Foreign Correspondent of the Year and Europe's top war reporting prize, the Prix Bayeux. She is the author of numerous books including 'Farewell Kabul', 'The Africa House', 'Waiting For Allah', 'The Sewing Circles of Herat' and 'House of Stone'. She co-wrote the international bestselling 'I am Malala' with Malala Yousafzai and 'Girl from Aleppo' with Nujeen Mustafa. She is a fellow of the Royal Geographical Society, an honorary fellow of University College, Oxford and was awarded an OBE by the Queen in 2013.

GOR011510709
9780007142521
0007142528
The Sewing Circles of Herat: My Afghan Years by Christina Lamb
Christina Lamb
Used - Like New
Paperback
HarperCollins Publishers
2003-07-07
368
N/A
Book picture is for illustrative purposes only, actual binding, cover or edition may vary.
The book has been read, but looks new. The book cover has no visible wear, and the dust jacket is included if applicable. No missing or damaged pages, no tears, possible very minimal creasing, no underlining or highlighting of text, and no writing in the margins
Trustpilot