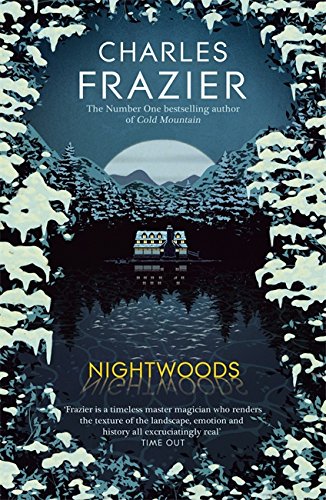 The new novel by the bestselling author of the classic COLD MOUNTAIN is a beautifully written, atmospheric novel of love and suspense.

The main lesson Luce had learned was that you couldn't count on anybody.

In the lonesome beauty of the forest, across the far shore of the mountain lake from town, Luce acts as caretaker to an empty, decaying Lodge, a relic of holidaymakers a century before. Her days are long and peaceful, her nights filled with Nashville radio and yellow lights shimmering on the black water. A solitary life, and the perfect escape.

Until the stranger children come.

Bringing fire. And murder. And love.

His best book to date . . . Frazier's exquisitely efficient style is matched by some finely tuned suspense . . . And the climactic pursuit through the darkened forest of the book's title proves to be gripping without ever descending into gothic melodrama. * The Sunday Times *
Charles Frazier's third novel is as accomplished as his first two . . . In anyone else's hands, this might turn out to be a gripping but ultimately forgettable thriller. Frazier, however, is a writer whose spare prose paradoxically oozes atmosphere - you can almost smell the verdant pine trees and hear the crack of the twigs underfoot . . . Beneath the chilling, photogenic story, the writing remains beautiful. * Independent *
[Frazier's] great strength, as well as presenting us with a fully realized physical backdrop, is the tenderness with which he renders the relationships at the core of this book, creating a compelling meditation on violence and the possibility that human love can heal even the deepest wound. * Publishers Weekly *
Frazier's taut prose, superb sense of place and timing and suspense-inducing skills save this from being just another thriller. * Daily Mail *
Its dazzling sentences are so meticulously constructed that you find yourself rereading them, trying to unpack their magic . . . By the book's climactic scenes in the shadowy mountain forest that gives NIGHTWOODS its title, the unhurried, poetic suspense is both difficult to bear and impossible to shake. * Entertainment Weekly *
The sense of drama slowly engulfs the reader like a mountain fog moving down a valley. It has heaps of atmosphere and texture. * www.thebookbag.co.uk *
Lyrical . . . written in understated, poetic prose. * Herald *
It's Walden by way of Cormac McCarthy, a bleak southern Gothic landscape that Frazier describes in a stark language of elision * Financial Times *
There's an almost rarefied atmosphere to this novel . . . mostly the breathless delight comes from Frazier's poetic sensibility towards the brutality and beauty of nature. My advice on NIGHTWOODS is to soak up the purity of Frazier's prose before Hollywood gets a look in. * Sunday Telegraph *
Extraordinary * Independent on Sunday *
Wonderfully atmospheric, as twisty as a country road * The Times *
The writing is so beautiful it almost takes your breath away. NIGHTWOODS is every bit as good as Frazier's first book, the bestselling COLD MOUNTAIN. Everything about it rings true, from the very first line to the gripping finale. * Herald Sun *
A beautifully written tale and an atmospheric thriller - the perfect story to curl up with on a cold winter's night. * Good Book Guide *
a beautiful tale of suspense . . . there is a classic film noir feel to it . . . Frank and Dolores are fascinatingly real . . . The dialogue is witty and the depiction of the Appalachians so sumptuous that I minded not one jot that the denouement, in trying to be understated, almost vanished from the page . . . * The Times, Book Club *
Frazier is very good at the slow and nuanced process by which emotionally thwarted, and justifiably suspicious, characters come together, meeting always against a backdrop of violence and upheaval * Guardian *
The book . . . matches Frazier's style: all stripped-down dialogue and an acoustic approach to narrative. This is a land where not much happens, where characters communicate only when necessary. The book's slow pace is entirely fitting for the vast, empty land in which it is set. That is its glory * The Times, Book Club *
This gripping account of a woman under threat in rural Carolina is the finest novel to date from the author of COLD MOUNTAIN * The Sunday Times *

Charles Frazier grew up in the mountains of North Carolina. COLD MOUNTAIN, his highly acclaimed first novel, was an international bestseller, selling over one million copies and winning the National Book Award in 1997. It was the inspiration for the Oscar-winning film directed by Anthony Minghella and starring Nicole Kidman, Jude Law, and Renee Zellweger.

A second novel, THIRTEEN MOONS, was published by Sceptre in 2007 and NIGHTWOODS, Charles' latest novel set in a lakeside town in 1960s North Carolina, was published in September 2011. To find out more, visit Charles' Facebook page www.facebook.com/CharlesFrazierAuthor or follow him on Twitter at twitter.com/Charles_Frazier.

GOR003275378
9781444731248
1444731246
Nightwoods by Charles Frazier
Charles Frazier
Used - Very Good
Hardback
Hodder & Stoughton General Division
2011-09-27
272
N/A
Book picture is for illustrative purposes only, actual binding, cover or edition may vary.
This is a used book - there is no escaping the fact it has been read by someone else and it will show signs of wear and previous use. Overall we expect it to be in very good condition, but if you are not entirely satisfied please get in touch with us
Trustpilot