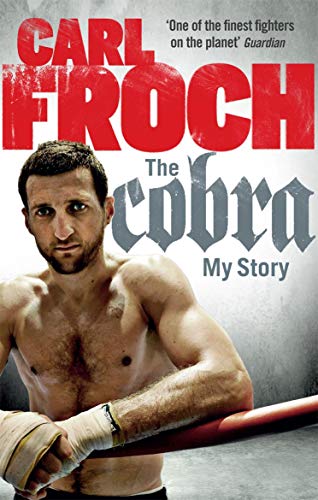 The Cobra by Carl Froch

In 29 professional fights has suffered defeat only twice.

The Cobra: My Story by Carl Froch

Carl Froch grew up on a tough Nottingham housing estate. His dad took him to the local boxing gym at just nine years old, hoping boxing would keep him out of trouble. Carl's incredible natural ability soon became clear and he rapidly ascended the heights of professional boxing, becoming three-time Super Middleweight champion and Britain's most exciting boxer.

In 29 professional fights has suffered defeat only twice. His greatest fights have already gone down in boxing history. In 2009 he was knocked down for the first time in his career by Jermain Taylor. Behind on everyone's scorecard but his own, until, with just 14 seconds of the fight to go, he came back in spectacular fashion with a stunning knock out. In 2012 he emphatically beat Lucian Bute to reclaim his belt in front of record audiences. The press described the fight as 'one of the best nights in British boxing'.

The Cobra follows Britain's most respected boxer every step of the way as he prepares for, and fights, the most important bouts of his life. Honest, outspoken, and every inch the boy from Nottingham, Carl pulls no punches in his revealing story from inside the high-stakes world of boxing, from his first discovery of his talent to his ascent to World Champion.

One of the finest fighters on the planet * Guardian *
The saviour of British Boxing * Daily Mail *
If there is a more exciting fighter than Carl Froch in this country I don't know where he is hiding * Barry McGuigan *
Froch is a great fighter... a great British world champion * Telegraph *
Arguably the best pound-for-pound fighter in the UK * Shortlist *
Carl Froch was born in Nottingham in 1977. He took up boxing aged nine, and turned pro in 2002 after winning two amateur titles. He is a three-time Super Middleweight World champions, and one of Britain's most respected fighters of all time.
GOR011381851
9780091938307
0091938309
The Cobra: My Story by Carl Froch
Carl Froch
Used - Like New
Paperback
Ebury Publishing
2013-01-31
400
N/A
Book picture is for illustrative purposes only, actual binding, cover or edition may vary.
The book has been read, but looks new. The book cover has no visible wear, and the dust jacket is included if applicable. No missing or damaged pages, no tears, possible very minimal creasing, no underlining or highlighting of text, and no writing in the margins
Trustpilot