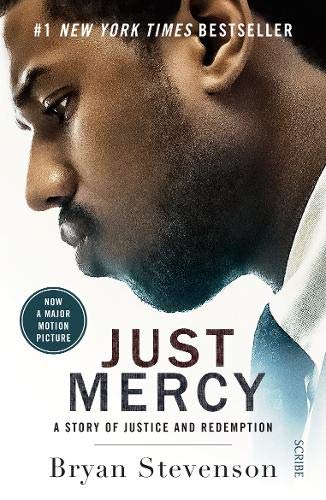 A #1 New York Times bestseller, this is a powerful, true story about the potential for mercy to redeem us, and a clarion call to fix America's broken justice system, as seen in the HBO documentary True Justice.

The US has the highest rate of incarceration in the world. One in every 15 people born there today is expected to go to prison. For black men this figure rises to one in 3. And Death Row is disproportionately black, too.

Bryan Stevenson grew up poor in the racially segregated South. His innate sense of justice made him a brilliant young lawyer, and one of his first defendants was Walter McMillian, a black man sentenced to die for the murder of a white woman - a crime he insisted he didn't commit. The case drew Bryan into a tangle of conspiracy, political machination, startling racial inequality, and legal brinkmanship - and transformed his understanding of mercy and justice forever.

At once an unforgettable account of an idealistic lawyer's coming of age and a moving portrait of the lives of those he has defended, Just Mercy is an inspiring argument for compassion in the pursuit of justice.

'Bryan Stevenson is America's young Nelson Mandela - a brilliant lawyer fighting with courage and conviction to guarantee justice for all.'

'From the frontlines of social justice comes one of the most urgent voices of our era. Bryan Stevenson is a real-life, modern-day Atticus Finch who, through his work in redeeming innocent people condemned to death, has sought to redeem the country itself. This is a book of great power and courage. It is inspiring and suspenseful. A revelation.'

-- Isabel Wilkerson, author of The Warmth of Other Suns

'Bryan Stevenson is one of my personal heroes, perhaps the most inspiring and influential crusader for justice alive today, and Just Mercy is extraordinary. The stories told within these pages hold the potential to transform what we think we mean when we talk about justice.'

'This is so important. Stevenson explains how deep-rooted racism is, while giving hope that it doesn't have to exist.'

'Our American criminal justice system has become an instrument of evil. Bryan Stevenson has labored long and hard, and with great skill and temperate passion, to set things right. Words such as important and compelling may have lost their force through overuse, but reading this book will restore their meaning, along with one's hopes for humanity.'

'Just Mercy is as deeply moving, poignant and powerful a book as has been, and maybe ever can be, written about the death penalty, and the failures of the administration of criminal justice ... [It] will make you gasp at the inhumanity of humankind.'

'Powerful ... This book will shock, anger and inspire you.'

'Unfairness in the justice system is a major theme of our age ... This book brings new life to the story by placing it in two affecting contexts: Stevenson's life work and the deep strain of racial injustice in American life ... You don't have to read too long to start cheering for this man. Against tremendous odds, Stevenson has worked to free scores of people from wrongful or excessive punishment, arguing five times before the Supreme Court ... The book extols not his nobility, but that of the cause, and reads like a call to action for all that remains to be done ... The message of the book, hammered home by dramatic examples of one man's refusal to sit quietly and countenance horror, is that evil can be overcome, a difference can be made. Just Mercy will make you upset and it will make you hopeful ... Bryan Stevenson has been angry about [the criminal justice system] for years, and we are all the better for it.'

'Inspiring ... A work of style, substance and clarity ... Stevenson is not only a great lawyer, he's also a gifted writer and storyteller. His memoir should find an avid audience among players in the legal system - jurists, prosecutors, defense lawyers, legislators, academics, journalists - and especially anyone contemplating a career in criminal justice.'

'After the shooting of Michael Brown in Ferguson, Mo., I wrote a couple of columns entitled When Whites Just Don't Get It. The reaction to those columns - sometimes bewildered, resentful or unprintable - suggests to me that many whites in America don't understand the depths of racial inequity lingering in this country. This inequity is embedded in our law enforcement and criminal justice system, and that is why Bryan Stevenson may, indeed, be America's Mandela ... Stevenson, 54, grew up in a poor black neighborhood in Delaware and ended up at Harvard Law School. He started the Equal Justice Initiative, based in Montgomery, Ala., to challenge bias and represent the voiceless. It's a tale he recounts in a searing, moving and infuriating memoir that is scheduled to be published later this month, Just Mercy.'

'Not since Atticus Finch has a fearless and committed lawyer made such a difference in the American South. Though larger than life, Atticus exists only in fiction. Bryan Stevenson, however, is very much alive and doing God's work fighting for the poor, the oppressed, the voiceless, the vulnerable, the outcast, and those with no hope. Just Mercy is his inspiring and powerful story.'

'A distinguished NYU law professor and MacArthur grant recipient offers the compelling story of the legal practice he founded to protect the rights of people on the margins of American society ... Emotionally profound, necessary reading.' STARRED REVIEW

'Just Mercy is every bit as moving as To Kill a Mockingbird, and in some ways more so ... [It] demonstrates, as powerfully as any book on criminal justice that I've ever read, the extent to which brutality, unfairness, and racial bias continue to infect criminal law in the United States. But at the same time that [Bryan] Stevenson tells an utterly damning story of deep-seated and widespread injustice, he also recounts instances of human compassion, understanding, mercy, and justice that offer hope ... Just Mercy is a remarkable amalgam, at once a searing indictment of American criminal justice and a stirring testament to the salvation that fighting for the vulnerable sometimes yields.'

'Stevenson's contributions to social justice have been remarkable. But his efforts, on top of his continuing legal practice, to provide this inside glimpse of the criminal justice system are priceless.'

'A passionate account of the ways our nation thwarts justice and inhumanely punishes the poor and disadvantaged.' STARRED REVIEW

'This powerful book is a damning indictment of the US "justice" system, which has the world's highest rate of incarceration ... A gifted narrator as well as a great lawyer, from his long dedication to helping the poor to achieve justice and mercy, he has learned that "each of us is more than the worst thing we've ever done.'

'[T]he author's experience with the flaws in the American justice system add extra gravity to a deeply disturbing and oft-overlooked topic.'

'Stevenson reveals how much of a difference believing in someone and fighting their cause can make. An incredible story ... may help fuel the fire on your own journey.'

'Just Mercy presents a scathing expose of the inequalities, racial bias and discrimination that has characterised the US justice system ... A profoundly important work.'

'Stevenson's revelatory and thought-provoking memoir, Just Mercy, is a read that alters one's empathy meter and forever sits deep within the psyche.'

'A confronting look at the corrupt and prejudiced trappings of the current criminal justice system in the United States and a moving window into the lives of those persecuted by it.'

* Citizens of the World *
Bryan Stevenson is the executive director of the Equal Justice Initiative in Montgomery, Alabama, and a professor of law at New York University Law School. He has won relief for dozens of condemned prisoners, argued five times before the Supreme Court, and won national acclaim for his work challenging bias against the poor and people of colour. He has received numerous awards, including the MacArthur Foundation 'Genius' Grant.
GOR010378750
9781912854790
1912854791
Just Mercy (Film Tie-In Edition): a story of justice and redemption by Bryan Stevenson (Equal Justice Initiative)
Bryan Stevenson (Equal Justice Initiative)
Used - Like New
Paperback
Scribe Publications
2020-01-09
368
Winner of NAACP Image Award for Best Non-Fiction. Winner of Andrew Carnegie Medal for Excellence in Nonfiction 2015 (United States) Winner of Dayton Literary Peace Prize 2015 (United States) Short-listed for Kirkus Prize for Nonfiction (United States). Short-listed for Los Angeles Times Book Prize 2015 Short-listed for CWA Non Fiction Dagger 2015 (UK) Long-listed for The Warwick Prize for Writing 2015 (UK)
Book picture is for illustrative purposes only, actual binding, cover or edition may vary.
The book has been read, but looks new. The book cover has no visible wear, and the dust jacket is included if applicable. No missing or damaged pages, no tears, possible very minimal creasing, no underlining or highlighting of text, and no writing in the margins
Trustpilot