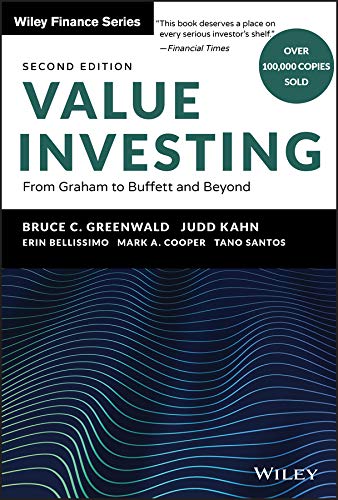 * A second edition to the classic and widely popular Value Investing, which was hailed as better than Benjamin Graham s 1950, The Intelligent Investor.

Value Investing: From Graham to Buffett and Beyond by Bruce C. Greenwald

BRUCE C. GREENWALD was Founding Director of the Heilbrunn Center for Graham and Dodd Investing at Columbia Business School from 2001 until his retirement in 2019. In addition to training thousands of students in the mysteries of value investing, he taught oversubscribed courses on the economics of business strategy and globalization. His book Competition Demystified, published in 2005, is still in print. He has also been Chairman of Paradigm Capital Management since its founding in 2007 and the Director of Research at First Eagle Funds from 2007-11, serving as a senior advisor since.

JUDD KAHN is currently a partner in Davidson Kahn Capital Management. He started his professional career as a historian, worked as a consultant and financial executive, and has been involved in investment management since 2000. He has a doctorate in history from UC Berkeley.

ERIN BELLISSIMO is the Managing Director of Notre Dame's Institute for Global Investing. She was a founding director of Columbia's Heilbrunn Center, has worked in hedge funds and banking, and sits on the board of Girls Who Invest. She has a BSBA from Bucknell and an MBA from the Wharton School at the University of Pennsylvania.

TANO SANTOS is the David L. and Elsie M. Dodd Professor of Finance and the Faculty Director of Columbia's Heilbrunn Center. He has succeeded Bruce Greenwald as the professor teaching the value investing course. He has a doctorate in economics from the University of Chicago.

2 Searching for Value: Finding the Right Side of the Trade 17

4 Valuing the Assets: From Book Value to Replacement Costs 71

8 The Valuation of Franchise Stocks 187

NPB9780470116739
9780470116739
0470116730
Value Investing: From Graham to Buffett and Beyond by Bruce C. Greenwald
Bruce C. Greenwald
Wiley Finance
New
Hardback
John Wiley & Sons Inc
2020-12-08
464
N/A
Book picture is for illustrative purposes only, actual binding, cover or edition may vary.
This is a new book - be the first to read this copy. With untouched pages and a perfect binding, your brand new copy is ready to be opened for the first time
Trustpilot