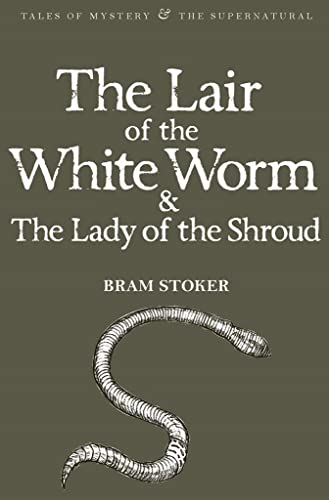 Here are two great, neglected horror novels by Bram Stoker, author of "Dracula", together in one volume for the first time

With an Introduction by David Stuart Davies.

'The worst parts were the great masses of flesh of the monstrous Worm, in all its red and sickening aspect... The sight was horrible enough, but, with the awful smell added, was simply unbearable. The Worm's hole appeared to breathe forth death in its most repulsive forms.'

Here are two great, neglected horror novels by Bram Stoker, author of Dracula, together in one volume for the first time. It is a double treat for lovers of blood-curdling fantasy fiction.

The Lady of the Shroud, published here in its full and unabridged form, is a fascinating and engrossing concoction of a vampire tale, Ruritanian adventure story and science fiction romance. The novel fully demonstrates the breadth and ingenuity of Stoker's imagination.

The spine-chilling The Lair of the White Worm features a monstrous worm secreted for thousands of years in a bottomless well and able to metamorphose into a seductive woman of a reptilian beauty who survives on her victim's life blood. The novel contains some of Stoker's most graphic and grisly moments of horror.

GOR004275039
9781840226454
1840226455
The Lair of the White Worm & The Lady of the Shroud by Bram Stoker
Bram Stoker
Tales of Mystery & The Supernatural
Used - Good
Paperback
Wordsworth Editions Ltd
2010-02-05
448
N/A
Book picture is for illustrative purposes only, actual binding, cover or edition may vary.
This is a used book - there is no escaping the fact it has been read by someone else and it will show signs of wear and previous use. Overall we expect it to be in good condition, but if you are not entirely satisfied please get in touch with us
Trustpilot