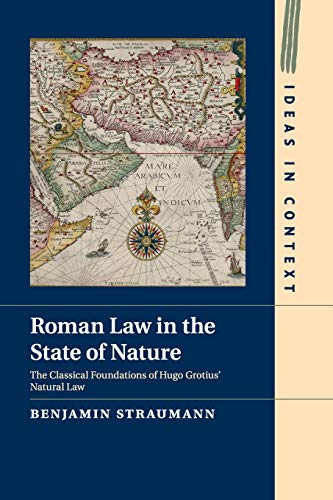 This comprehensive analysis of the foundations of Hugo Grotius' natural law theory assesses for the first time the importance of texts from classical antiquity, especially Roman law and a specifically Ciceronian brand of Stoicism, and explores the significance of the Roman tradition for Grotius, a humanist steeped in Roman law.

Roman Law in the State of Nature offers a new interpretation of the foundations of Hugo Grotius' natural law theory. Surveying the significance of texts from classical antiquity, Benjamin Straumann argues that certain classical texts, namely Roman law and a specifically Ciceronian brand of Stoicism, were particularly influential for Grotius in the construction of his theory of natural law. The book asserts that Grotius, a humanist steeped in Roman law, had many reasons to employ Roman tradition and explains how Cicero's ethics and Roman law - secular and offering a doctrine of the freedom of the high seas - were ideally suited to provide the rules for Grotius' state of nature. This fascinating new study offers historians, classicists and political theorists a fresh account of the historical background of the development of natural rights, natural law and of international legal norms as they emerged in seventeenth-century early modern Europe.
'Grotius' significant influence on the development of international law is undisputed, and existing scholarship has investigated his works from almost every possible perspective. The more surprising it seems, then, that the Roman legacy and, in particular, the significant influence of Cicero's writings on Grotius, have been neglected. Straumann addresses this issue masterfully in his competent and original interpretation. His command of the ancient and early modern material is exemplary.' Peter Schroeder, History Today
'Straumann's interpretation ... is based on a line of argument that in many ways is original ... [a few] words do not do justice to the riches of Straumann's use of classical sources to interpret Grotius, but his ambition goes beyond this.' Knud Haakonssen, Bryn Mawr Classical Review
'Focusing on the ideas in the texts, rather than the texts themselves, Grotius may very well be considered a pioneering thinker, and the work under review does a very good job of cementing his place in the history of ideas. I would therefore strongly recommend legal historians, Romanists and historians of political theory, philosophy and ideas alike to pick up this book.' Jacob Giltaij, Grotiana
'Straumann's book is a magnificent achievement ... it deserves a wide readership. The book, which will be an instant classic in Grotius studies, will naturally attract the interest of historians of political thought, legal historians and classicists. But I would also recommend this book especially to practitioners of contemporary Anglophone moral and political philosophy, who should be reminded why Grotius was, for centuries, regarded as the towering figure in the history of modern ethics.' Daniel Lee, History of Political Thought
Benjamin Straumann is Alberico Gentili Fellow at New York University School of Law. He is the editor, with Benedict Kingsbury, of Alberico Gentili's The Wars of the Romans: A Critical Edition and Translation of De armis Romanis (2011). With Nehal Bhuta and Anthony Pagden, Straumann edits the new series in the History and Theory of International Law for Oxford University Press.
Introduction; 1. Natural law in historical context; 2. A novel doctrine of the sources of law: nature and the classics; 3. Proving natural law: the influence of classical rhetoric on Grotius' method; 4. Social instinct or self-preservation?; 5. Justice for the state of nature: from Aristotle to the Corpus Iuris; 6. Grotius' concept of the state of nature; 7. Natural rights: Roman remedies in the state of nature; 8. Natural rights and just wars; 9. Enforcing natural law: the right to punish; Epilogue; Bibliography; Index.
NLS9781107470163
9781107470163
1107470161
Roman Law in the State of Nature: The Classical Foundations of Hugo Grotius' Natural Law by Benjamin Straumann (New York University)
Benjamin Straumann (New York University)
Ideas in Context
New
Paperback
Cambridge University Press
2019-11-28
285
N/A
Book picture is for illustrative purposes only, actual binding, cover or edition may vary.
This is a new book - be the first to read this copy. With untouched pages and a perfect binding, your brand new copy is ready to be opened for the first time
Trustpilot