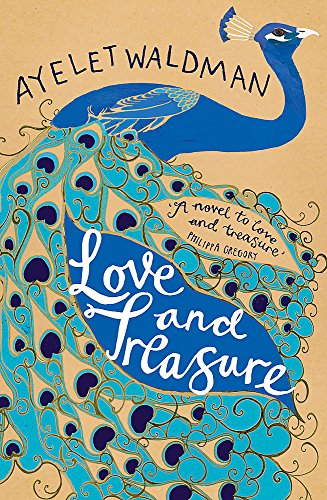 Love and Treasure by Ayelet Waldman

A Washington Post and Oprah Best Book of the Year. An epic, thrilling and poignant novel split between Europe and America, war and peace, the past and the present, told through the unlikely passage of a dazzling peacock pendant.

Love and Treasure by Ayelet Waldman

Salzburg, 1946. A fugitive train loaded with the plunder of a doomed people. A dazzling, jewel-encrusted, peacock-shaped pendant. And three men - an American lieutenant who fought in WWII, an Israeli-born dealer of Nazi plunder, and a pioneering psychiatrist in fin-de-siecle Budapest - who find their carefully-wrought lives turned upside-down by three fierce women, each locked in a struggle against her own history and the history of their times.

Spanning continents and a century marked by war and revolution, Love and Treasure is by turns funny and tragic, thrilling and harrowing, mapping the darkness of a shattered Europe against the heartbreak of a modern New Yorker. Told through the prism of the peacock pendant, the novel charts the ebb and flow of history, fate and fortune from 1914 Budapest to present-day New York.

And at the centre of Love and Treasure, nested like a photograph hidden in a locket, a mystery: where does the worth of a people and its treasures truly lie? What is the value of a gift, when giver and recipient have been lost - of a love offering when the beloved is no more?

Ayelet Waldman is the author of Red Hook Road, Love and Treasure and the New York Times bestseller Bad Mother: A Chronicle of Maternal Crimes, Minor Calamities and Occasional Moments of Grace. Her novel Love and Other Impossible Pursuits was made into a film starring Natalie Portman. Her personal essays have been published in a wide variety of newspapers and magazines, including the New York Times, Vogue, the Washington Post, and the Wall Street Journal.
She and her husband, the novelist Michael Chabon, live in Berkeley, California, with their four children.

GOR011231435
9781444763119
1444763113
Love and Treasure by Ayelet Waldman
Ayelet Waldman
Used - Like New
Paperback
Hodder & Stoughton General Division
2014-09-04
448
N/A
Book picture is for illustrative purposes only, actual binding, cover or edition may vary.
The book has been read, but looks new. The book cover has no visible wear, and the dust jacket is included if applicable. No missing or damaged pages, no tears, possible very minimal creasing, no underlining or highlighting of text, and no writing in the margins
Trustpilot