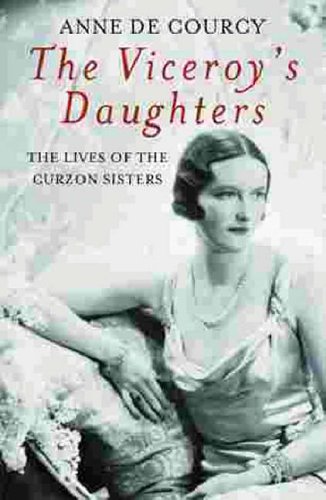 The lives of the three daughters of Lord Curzon: glamorous, rich, independent and wilful.

The lives of the three daughters of Lord Curzon: glamorous, rich, independent and wilful.

Irene (born 1896), Cynthia (b.1898) and Alexandria (b.1904) were the three daughters of Lord Curzon, Viceroy of India 1898-1905 and probably the grandest and most self-confident imperial servant Britain ever possessed.

After the death of his fabulously rich American wife in 1906, Curzon's determination to control every aspect of his daughters' lives, including the money that was rightfully theirs, led them one by one into revolt against their father. The three sisters were at the very heart of the fast and glittering world of the Twenties and Thirties.

Irene, intensely musical and a passionate foxhunter, had love affairs in the glamorous Melton Mowbray hunting set. Cynthia ('Cimmie') married Oswald Mosley, joining him first in the Labour Party, where she became a popular MP herself, before following him into fascism. Alexandra ('Baba'), the youngest and most beautiful, married the Prince of Wales's best friend Fruity Metcalfe. On Cimmie's early death in 1933 Baba flung herself into a long and passionate affair with Mosley and a liaison with Mussolini's ambassador to London, Count Dino Grandi, while enjoying the romantic devotion of the Foreign Secretary, Lord Halifax. The sisters see British fascism from behind the scenes, and the arrival of Wallis Simpson and the early married life of the Windsors. The war finds them based at 'the Dorch' (the Dorchester Hotel) doing good works. At the end of their extraordinary lives, Irene and Baba have become, rather improbably, pillars of the establishment, Irene being made one of the very first Life Peers in 1958 for her work with youth clubs.

Anne de Courcy is the author of thirteen widely acclaimed works of social history and biography, including THE HUSBAND HUNTERS, THE FISHING FLEET, THE VICEROY'S DAUGHTERS and DEBS AT WAR. In the 1970s she was Woman's Editor on the LONDON EVENING NEWS and in the 1980s she was a regular feature-writer for the EVENING STANDARD. She is also a former features writer and reviewer for the DAILY MAIL. She lives in London SW3.
GOR001210219
9780753812556
075381255X
The Viceroy's Daughters by Anne de Courcy
Anne de Courcy
Used - Very Good
Paperback
Orion Publishing Co
2001-07-05
464
N/A
Book picture is for illustrative purposes only, actual binding, cover or edition may vary.
This is a used book - there is no escaping the fact it has been read by someone else and it will show signs of wear and previous use. Overall we expect it to be in very good condition, but if you are not entirely satisfied please get in touch with us
Trustpilot