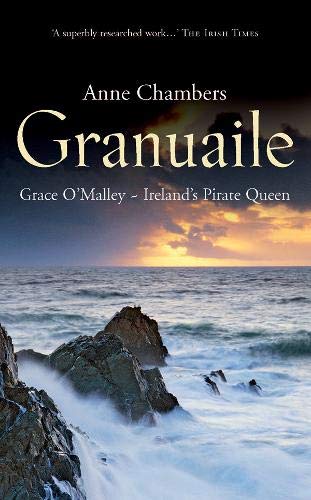 The story of one remarkable woman's quest for survival and fulfilment, by land and by sea, in a time of profound political upheaval and male chauvinistic bias. Grace O'Malley was the original trail-blazer and mould-breaker.

`There came to me also a most famous feminine sea called Granny Imallye ... with three galleys and two hundred fighting men ... She brought with her her husband for she was as well by sea as by land well more than Mrs Mate with him. This was a notorious woman in all the coasts of Ireland ...' Sir Henry Sidney, Lord Deputy of Ireland, 1576

Fearless leader by land and by sea, political pragmatist and tactician, rebel, pirate and matriarch, the `most notorious woman in all the coasts of Ireland' Grace O'Malley challenges and manipulates the turbulent politics of the 16th century - a period of immense social change and political upheaval. Breaching boundaries of gender imbalance and bias, she re-wrote the rules to become one of the world's documented feminist trail-blazers.

In Granuaile, the original international bestselling biography of this historic icon, from rare and exclusive contemporary manuscript material, author Anne Chambers draws Ireland's great pirate queen in from the vagueness of myth and legend and presents the historical reality of one of the world's most extraordinary female leaders.

First published in 1979 Granuaile has become a milestone in Irish publishing and author Anne Chambers the catalyst for the restoration of Grace O'Malley to political, social and maritime history.

Over the years Anne's name has become synonymous with Grace O'Malley. Her biography has become an inspiration for documentary and film makers, composers, artists and writers from a range of creative disciplines worldwide, and is now recommended reading in schools curricula in Ireland and abroad.

In this 30th anniversary edition, as well as some textual additions, the inclusion of new transcriptions of contemporary 16th-century manuscript material, located and deciphered by the author, will be of special interest to students, teachers and historians as well as to the general reader.

Biographer, novelist and screenplay writer, Anne Chambers' most recent books include Ranji: Maharajah of Connemara; At Arm's Length - Aristocrats in the Republic of Ireland; Granuaile: Sea Queen of Ireland (for children); Finding Tom Cruise and Other Stories; Shadow Lord: Theobald Bourke - Son of the Pirate Queen. more information on her writing can be found on her website www.graceomalley-annechambers.com
GOR001390281
9780717145829
0717145824
Granuaile: Grace O'Malley - Ireland's Pirate Queen by Anne Chambers
Anne Chambers
Used - Very Good
Paperback
Gill
2009-03-20
224
N/A
Book picture is for illustrative purposes only, actual binding, cover or edition may vary.
This is a used book - there is no escaping the fact it has been read by someone else and it will show signs of wear and previous use. Overall we expect it to be in very good condition, but if you are not entirely satisfied please get in touch with us
Trustpilot