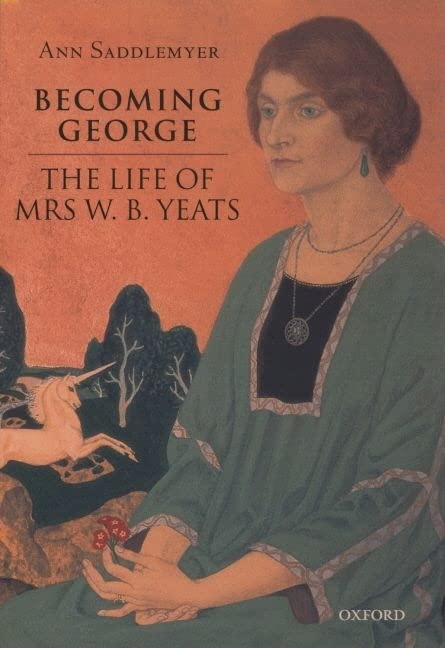 Ann Saddlemyer's biography of W.B. Yeats's wife, George, portrays a talented woman whose creative influence has never been fully understood. She was wife and manager of a famous poet, and mother to his children, but also an inspired visionary and a practical woman of the arts.

Becoming George: The Life of Mrs W.B.Yeats by Ann Saddlemyer

'I, the poet William Yeats, | With old mill boards and sea-green slates, | And smithy work from the Gort forge, | Restored this tower for my wife George; | And may these characters remain | When all is ruin once again.' With this lovely six-line poem, W. B. Yeats dedicated the renovation of Thoor Ballylee to his wife. But the poem's truth conceals another, and different truth - that they worked together at the restoration, and it was largely her vision and hands that created a dwelling from the former ruins. Just how symbolic this is, of the close but largely hidden collaboration between them, is revealed by this deeply-researched life of George Yeats - the first full-scale biography of a woman of remarkable gifts and generous self-concealment. Raised in the decades before the First War, in London literary salons where the arts and occult met, Georgie Hyde Lees became an art student, accomplished linguist, and serious scholar of medieval arcana, anthroposophy, and astrology. She was a lifelong friend of Ezra Pound and his wife Dorothy Shakespear, in whose social circle Yeats also moved; he sponsored her initiation to the Order of the Golden Dawn. In 1917 they married (she was 25, he 52), and on their honeymoon Georgie began the automatic writing which formed the substance of A Vision, and from which sprang the ideas that occupied Yeats for the rest of his life. Her 'extrasensory' perceptions fed his poetic imagery as her practicality and warmth supplied the environment for his writing. As with the restoration of Ballylee, they were intimate collaborators - but her instinct was always for self-effacement. Though valued by numerous writer-friends (among them Lennox Robinson, Thomas McGreevy, and Frank O'Connor) as a perceptive critic - and known to have written two plays and a novel, which she suppressed - she deliberately hid her talents from public view. Her choice was to appear as Yeats's wife, helpmeet, and secretary, the mother of his children - and for thirty years after his death the tireless overseer of his literary legacy and a knowledgeable adviser to generations of younger critics and writers. For the first time, this intelligent and creative woman is allowed to take centre stage. Drawing on memoirs and a wealth of unknown and unpublished sources, this biography by the distinguished scholar Ann Saddlemyer reveals someone much more significant than just 'Mrs W. B. Yeats' - a personality at once visionary and practical, and an important figure in twentieth-century literary history.
Review from previous edition Saddlemyer takes neither a sensational nor reductive view * TLS, Edna Longley *
Ann Saddlemyer has written a profound, exhaustive, and richly evocative life of this truly remarkable woman * John Banville, New York Review of Books *
magnificently authoritative biography...a thoroughly enjoyable though highly demanding read...the steady accumulation of detail subtly discloses the relationships between cause and effect, place and time, desire and experience, personal and public which shaped the life...we will perpetually be in Saddlemyer's debt for recounting that story of what actually happened in such illuminating and engaging detail * Irish Studies Review *
Unputdownable * P.J.Kavanagh, Spectator *
List of Illustrations; Family Tree; Introduction; Prelude - Ballylee, August 1923; I. PROGRESSIONS 1892-1918; 1. Ancestry; 2. Childhood; 3. Friends; 4. Studies; 5. The Golden Dawn; 6. Forest Row; 7. London, Oxford, and Dublin; II. CONJUNCTIONS 1919-1921; 8. Coole; 9. Anne; 10. Oxford and New York; 11. Michael; III. DIRECTIONS 1922-1928; 12. Ballylee; 13. Merrion Square; 14. Dublin; IV. TRANSITS 1929-1939; 15. Rapallo; 16. Fitzwilliam Square; 17. Riversdale; 18. Majorca; 19. Menton; V. MAPPING; 20. Palmerston Road; 21. Seekers and Friends; 22. Postlude: Odysseys; The Death of William Gilbert Hyde Lees; Abbreviations; Notes; Index
GOR003480397
9780198112327
0198112327
Becoming George: The Life of Mrs W.B.Yeats by Ann Saddlemyer
Ann Saddlemyer
Used - Very Good
Hardback
Oxford University Press
20020919
848
Short-listed for James Tait Black Memorial Prize (Biography) 2002
Book picture is for illustrative purposes only, actual binding, cover or edition may vary.
This is a used book - there is no escaping the fact it has been read by someone else and it will show signs of wear and previous use. Overall we expect it to be in very good condition, but if you are not entirely satisfied please get in touch with us
Trustpilot