The End of Individualism and the Economy Ann E. Davis (Marist College, USA) 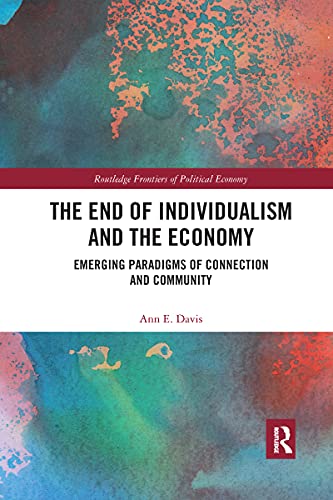 The End of Individualism and the Economy by Ann E. Davis (Marist College, USA)

The End of Individualism and the Economy: Emerging Paradigms of Connection and Community by Ann E. Davis (Marist College, USA)

Individualism has been one of the driving forces in the rise of modern capitalism, and methodological individualism has been dominant in social science for many years. In this paradigm the economy is seen as a machine to routinize production and improve efficiency, and the discipline of economics has come to focus on control and automation. Recent innovations in natural and social sciences, however, indicate a shift in thinking away from individualism and towards interconnectedness.

The End of Individualism and the Economy: Emerging Paradigms of Connection and Community traces the origins of the individual in history, philosophy, economics, and social science. Drawing from linguistic philosophy, there is increasing attention to language as a social substrate for all institutions, including money and the market. One irony is that the individual is a key term, related to distinct institutions and associated expertise; that is, the individual is social. The book explores the influence of individualism in the subversion of class consciousness, the view of impersonality as a virtue, and the rise of financialization. The founding assumption of economics, the rational autonomous individual with exogenous tastes, undercuts social solidarity and blocks awareness of interconnections and interdependencies. The text looks forward and embraces the new paradigms and alternative forms of governance, economics, and science which can be developed based on collectives and communities, with new values, frameworks, and world views.

This work is suitable for academics, students, scholars, and researchers with an interest in economic and social collectives and methodological individualism, as well as those studying the connections between economics and other disciplines in the social and natural sciences.

Ann E. Davis is Associate Professor of Economics at Marist College, USA, and author of Money as a Social Institution: The Institutional Development of Capitalism (Routledge, 2017).

(1) The Individual as a Key Term (2) Property and Reification (3) The Public/Private Divide (4) The Shaping of the Modern Liberal State (5) The Economics of Autophagy: Implications of the Economy as Machine (6) Methods of Social Science (7) Unique Individuals (8) The Property Paradigm (9) Contradictions (10) Backlash (11) Alternatives (12) Conclusions

NLS9781032174686
9781032174686
1032174684
The End of Individualism and the Economy: Emerging Paradigms of Connection and Community by Ann E. Davis (Marist College, USA)
Ann E. Davis (Marist College, USA)
Routledge Frontiers of Political Economy
New
Paperback
Taylor & Francis Ltd
2021-09-30
244
N/A
Book picture is for illustrative purposes only, actual binding, cover or edition may vary.
This is a new book - be the first to read this copy. With untouched pages and a perfect binding, your brand new copy is ready to be opened for the first time
Trustpilot