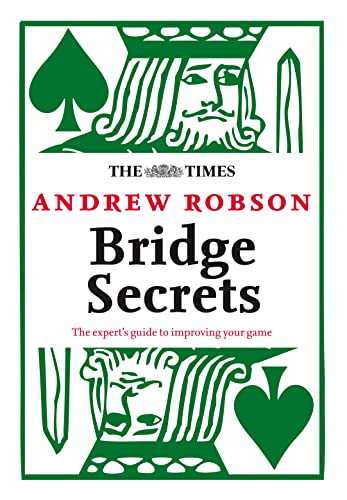 The Times: Bridge Secrets: The Expert's Guide to Improving Your Game (The Times Puzzle Books) by Andrew Robson

Broader in scope than The Times Bridge: Commons Mistakes and How to Avoid Them, Andrew has selected his best columns from The Times, which cover a wide range of themes. By explaining sample deals, aspects of the game are clarified and the reader's understanding of the game improves. Each deal begins with an engaging discourse before moving on to explain the technique. The book assumes a level of experience beyond that of beginner and targets those players as well as social players and club and tournament players.

Chapters cover:
Partnership: clarification, anticipation, communication. Andrew imparts the secrets of being a successful - and popular - partner.
Double Trouble: when to double and when to keep quiet - that is the question.
Opening Lead: how can you find the best lead, when you can't even see dummy? Some dramatic deals illustrate how to make the choice.
Trick One: how to avoid making a fatal error on the all-important first trick.
Finessing Fun: fascinating card-play tussles made simple.
Guess Who? Which opponent has the crucial missing card - and why?
Spot Cards: making use of all your assets is one secret of the winning player - ignore the lowly eights and sevens at your peril.
Never say Never: when to break normal guidelines - and why.
Mind of an Expert: Andrew gives away the secret workings of the world's best players.
Experts Err: even the best make mistakes. Let's all learn from them.
Freaks: we all love wild deals, and here are some of the wildest.
Bridge around Britain: some say it's fading. Nonsense - as these deals will testify.
Bridge around the world: New York, New Guinea or New South Wales - Andrew considers global bridge issues, and looks at some wonderful deals.
Stars of the future: School Bridge, Youth Camp Bridge, World Junior Championships...we feature some of the best young players, and look ahead to a bright future for the game.

Andrew Robson is Britain's foremost bridge player-teacher-writer. Indeed, he has radically altered the way many people view the game. Through his famous Bridge Club in Southwest London that he started from scratch in 1995, the many seminars he teaches around the country, and his daily column in The Times, Andrew's clear yet relaxed style has inspired tens of thousands of bridge lovers. Also rated one of the world's best players, Andrew has had countless tournament successes over the past twenty years. He is a former World Junior and European Champion, the first Englishman to win a US Major, and current World Individual Silver Medallist.

GOR001406896
9780007249398
000724939X
The Times: Bridge Secrets: The Expert's Guide to Improving Your Game (The Times Puzzle Books) by Andrew Robson
Andrew Robson
The Times Puzzle Books
Used - Very Good
Hardback
HarperCollins Publishers
20070903
224
N/A
Book picture is for illustrative purposes only, actual binding, cover or edition may vary.
This is a used book - there is no escaping the fact it has been read by someone else and it will show signs of wear and previous use. Overall we expect it to be in very good condition, but if you are not entirely satisfied please get in touch with us
Trustpilot