The Brewer of Preston Andrea Camilleri 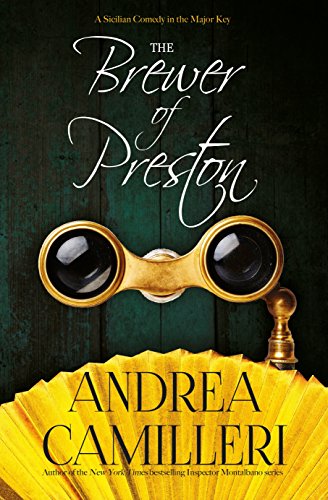 The Brewer of Preston by Andrea Camilleri

The bestselling author of the Inspector Montalbano series brings us back to Vigata in the nineteenth century for a rip-roaring comic novel.

The Brewer of Preston by Andrea Camilleri

From Andrea Camilleri, the bestselling author of the Inspector Montalbano mysteries, comes The Brewer of Preston, a hilarious standalone comedy.

1870s Sicily. Much to the displeasure of Vigata's stubborn populace, the town has just been unified under the Kingdom of Italy. They're now in the hands of a new government they don't understand, and they definitely don't like.

Eugenio Bortuzzi has been named Prefect for Vigata, a regional representative from the Italian government tasked to oversee the town. But the rowdy and unruly Sicilians don't care much for this rather pompous mainlander nor the mediocre opera he's hell-bent on producing in their new municipal theatre. The Brewer of Preston, it's called, and the Vigatese are revving up to wreak havoc on the performance's opening night . . .

Andrea Camilleri is one of Italy's most famous contemporary writers. His books have sold over sixty-five million copies worldwide. He lives in Rome. The Inspector Montalbano series has been translated into thirty-two languages and was adapted for Italian television, screened on BBC4. The Potter's Field, the thirteenth book in the series, was awarded the Crime Writers' Association's International Dagger for the best crime novel translated into English. In addition to his Inspector Montalbano novels, he is also the author of the historical murder mystery set in Vigata, The Hunting Season.
GOR007236765
9781447292180
1447292189
The Brewer of Preston by Andrea Camilleri
Andrea Camilleri
Used - Very Good
Hardback
Pan Macmillan
2016-01-28
256
N/A
Book picture is for illustrative purposes only, actual binding, cover or edition may vary.
This is a used book - there is no escaping the fact it has been read by someone else and it will show signs of wear and previous use. Overall we expect it to be in very good condition, but if you are not entirely satisfied please get in touch with us
Trustpilot