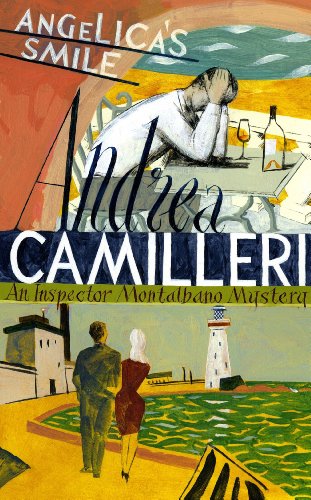 Angelica's Smile is the seventeenth novel in the gripping Inspector Montalbano mysteries by Andrea Camilleri.

After sitting in the car on the hill for about ten minutes, Montalbano realized this was a big mistake. Because he didn't think at all about the investigation, the burglars, or Mr. Z. He thought about Angelica . . . What had he done?

When members of Vigata's elite are targeted in a series of perfectly executed burglaries, Inspector Montalbano reluctantly takes the case. It soon becomes clear however that more links these privileged few than simply their lost possessions . . .

It isn't long too before Montalbano finds himself taken with one of the victims, the captivatingly beautiful young Angelica. But as the detective's attraction grows - until he can think of little else - a series of strange, anonymous letters claiming responsibility for the thefts begin to arrive . . .

With the allure of Angelica beginning to consume him and his relationship with Livia under threat, Montalbano must focus his mind to solve this perplexing investigation before events spiral out of all control.

Angelica's Smile is followed by the eighteenth book in the series, Game of Mirrors.

Andrea Camilleri was one of Italy's most famous contemporary writers. The Inspector Montalbano series, which has sold over 65 million copies worldwide, has been translated into thirty-two languages and was adapted for Italian television, screened on BBC4. The Potter's Field, the thirteenth book in the series, was awarded the Crime Writers' Association's International Dagger for the best crime novel translated into English. In addition to his phenomenally successful Inspector Montalbano series, he was also the author of the historical comic mysteries Hunting Season and The Brewer of Preston. He died in Rome in July 2019.
GOR006841840
9781447249153
1447249151
Angelica's Smile by Andrea Camilleri
Andrea Camilleri
Inspector Montalbano mysteries
Used - Very Good
Paperback
Pan Macmillan
2015-06-18
304
N/A
Book picture is for illustrative purposes only, actual binding, cover or edition may vary.
This is a used book - there is no escaping the fact it has been read by someone else and it will show signs of wear and previous use. Overall we expect it to be in very good condition, but if you are not entirely satisfied please get in touch with us
Trustpilot