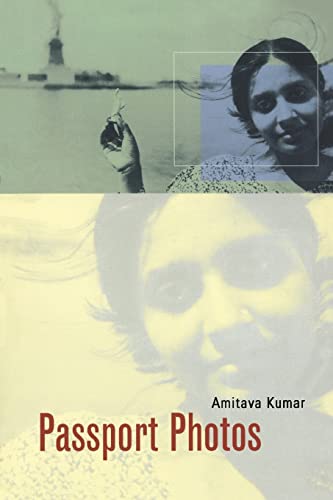 This volume, organized as a passport, combines theory, poetry, cultural criticism and photography to explore the complexities of the immigration experience, intervening in the impersonal language of the state.

Passport Photos, a self-conscious act of artistic and intellectual forgery, is a report on the immigrant condition. A multigenre book combining theory, poetry, cultural criticism, and photography, it explores the complexities of the immigration experience, intervening in the impersonal language of the state. Passport Photos joins books by writers like Edward Said and Trinh T. Minh-ha in the search for a new poetics and politics of diaspora. Organized as a passport, Passport Photos is a unique work, taking as its object of analysis and engagement the lived experience of post-coloniality--especially in the United States and India. The book is a collage, moving back and forth between places, historical moments, voices, and levels of analysis. Seeking to link cultural, political, and aesthetic critiques, it weaves together issues as diverse as Indian fiction written in English, signs put up by the border patrol at the U.S.-Tijuana border, ethnic restaurants in New York City, the history of Indian indenture in Trinidad, Native Americans at the Superbowl, and much more. The borders this book crosses again and again are those where critical theory meets popular journalism, and where political poetry encounters the work of documentary photography. The argument for such border crossings lies in the reality of people's lives. This thought-provoking book explores that reality, as it brings postcolonial theory to a personal level and investigates global influences on local lives of immigrants.
Amitava Kumar is Associate Professor of English at the University of Florida, and has been a Fellow at Yale University. He is the editor of Class Issues: Pedagogy, Cultural Studies, and the Public Sphere (1997), and Poetics/Politics: Radical Aesthetics for the Classroom (1999). Kumar was the script-writer and narrator for the award-winning documentary film Pure Chutney (1998).
Preface
Introduction

Conclusion
Appendix 1
Appendix 2
Notes
List of Illustrations
Acknowledgments
Credits
Index
CIN001020431
9780520218178
0520218175
Passport Photos by Amitava Kumar
Amitava Kumar
Used - Very Good
Paperback
University of California Press
20000614
290
N/A
Book picture is for illustrative purposes only, actual binding, cover or edition may vary.
This is a used book - there is no escaping the fact it has been read by someone else and it will show signs of wear and previous use. Overall we expect it to be in very good condition, but if you are not entirely satisfied please get in touch with us
Trustpilot