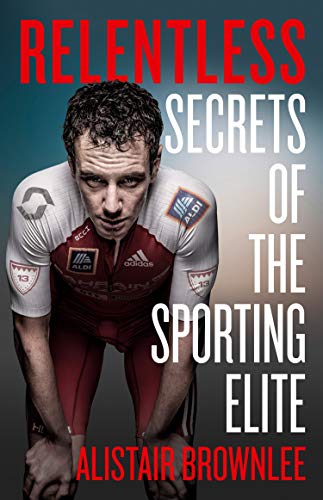 In his quest to define 'sporting greatness', double Olympic champion Alistair Brownlee has spent nearly 4 years interviewing and training with some of the greatest minds in sport to discover what it takes to become - and remain - a champion.

Relentless: Secrets of the Sporting Elite by Alistair Brownlee

In his quest to define 'sporting greatness', double Olympic champion Alistair Brownlee has spent nearly 4 years interviewing and training with some of the greatest minds in sport to discover what it takes to become - and remain - a champion.

From the age of 10 Alistair Brownlee has been obsessed with being the very best, and not just improving his sporting performance across his three specialist triathlon disciplines of swimming, cycling and running, but also understanding how a winner becomes a dominant champion. Winning gold in consecutive Olympic Games has only strengthened this need and desire.

Over the last 4 years Alistair has been on a journey to learn from the best, talking to elite figures across multiple sports - including Chris Froome, Ronnie O'Sullivan, Alastair Cook, Paula Radcliffe, Ian Poulter, Shane Williams, Ian Botham, Mark Webber and AP McCoy - as well as leading thinkers and scientists, to understand what enabled these remarkable individuals to rise to the very top, and to push the limits of human capability in their relentless pursuit of perfection.

Alistair Brownlee, MBE won back-to-back gold medals at the London 2012 and Rio 2016 Olympics, the only triathlete to have ever defended their title. He is a two-time world champion, a four-time European champion and the 2014 Commonwealth champion. The first triathlete to be nominated for BBC Sports Personality of the Year, he came second in 2016 behind Wimbledon champion Andy Murray. He was the flag bearer for England in the 2018 Commonwealth Games in Australia and has been nominated as a candidate for the International Olympic Committee's Athletes' Commission. Having recently moved up to the longer form of triathlon, he has already won two Ironman events, setting a course record when winning in Western Australia, and has twice finished runner-up in the Ironman 70.3 World Championships. He lives in Bramhope, West Yorkshire.

GOR011550750
9780008295288
000829528X
Relentless: Secrets of the Sporting Elite by Alistair Brownlee
Alistair Brownlee
Used - Very Good
Hardback
HarperCollins Publishers
2020-07-08
320
N/A
Book picture is for illustrative purposes only, actual binding, cover or edition may vary.
This is a used book - there is no escaping the fact it has been read by someone else and it will show signs of wear and previous use. Overall we expect it to be in very good condition, but if you are not entirely satisfied please get in touch with us
Trustpilot