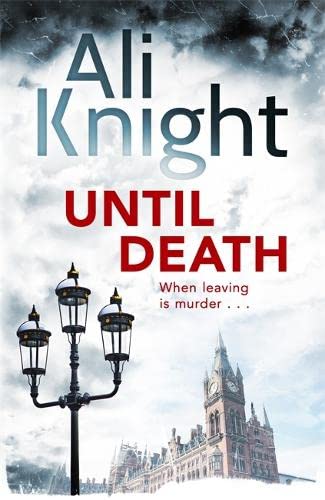 Until Death by Ali Knight

The unputdownable new psychological suspense novel by the author of WINK MURDER and THE FIRST CUT.

Until Death: A gripping thriller about the dark secrets hiding in a marriage by Ali Knight

Marriage is a prison for Kelly. Her controlling and manipulative husband Christos videos her in the house, has her followed and tracks her every move. She may be desperate to leave, but she's not stupid. If she runs, he'll make sure she never sees her children again.

Christos has a mistress, Sylvie, keen to pander to his every whim and even keener to step into Kelly's shoes, should she ever vacate them.

If Kelly is to escape, it will be in a way she never imagined, and people will get hurt . . .

A powerful portrayal of an abusive marriage and an utterly engrossing tale of corruption and obsession * Alex Marwood, bestselling author of The Wicked Girls *
A clever thriller with a heartfelt depiction of an abusive marriage, this is a gripping read * Sunday Mirror *
Praise for THE FIRST CUT * : *
[A] suspenseful Hitchcockian tale . . . [one of the] top ten crime books to take on holiday * Telegraph *
Top notch suspense! From first page to last, Knight delivers as she plunges an ordinary married couple into a steadily growing horror of past lies, fresh betrayals and murderous revenge. * Lisa Gardner *
'It is some time since I have been so completely absorbed and taken out of myself . . . This is Ali Knight's second book and it is hard to imagine how she can beat it, but I hope to goodness that she does! * www.shotsmag.co.uk *
The resourceful self-reliance of the imperilled heroine Nicky . . . the large cast and complicated happenings make an intriguing . . . read and Ali Knight writes well. * Literary Review *
This thriller will have you on the edge of your seat desperate to read more. Perfect for fans of James Patterson . . . I was left completely shocked with the twist at the end. * www.crimefictionlover.com *
Praise for WINK MURDER * : *
Jo Nesbo, Stephen King, Patricia Cornwell and Ali Knight * Independent Books of the Year 2011 *
A tight-plotted, too-close-for-comfort thriller that races to the finish. Pacey and disquieting, Knight's debut hints she might be a successor to Sophie Hannah's queen of suspense crown. * Stylist Book of the Week *
'A really enjoyable read.' * Martina Cole *
'Crackles from first page to last.' * Daily Mail *
'Tightly-plotted, high-pitched psychological thriller . . . what bright new talent Ali Knight does so successfully, and with a welcome fresh eye, is broach the great divide between public and private space.' **** * Daily Mirror *
'A fast-paced whodunit.' * Woman and Home *
'A psychological drama that grips from first to last' * Choice *

Ali Knight has worked as a journalist and sub-editor at the BBC, Guardian and Observer and helped to launch some of the Daily Mail and Evening Standard's most successful websites. She lives with her family in London.

GOR006933320
9781444777109
1444777106
Until Death: A gripping thriller about the dark secrets hiding in a marriage by Ali Knight
Ali Knight
Used - Very Good
Hardback
Hodder & Stoughton
2013-11-07
400
N/A
Book picture is for illustrative purposes only, actual binding, cover or edition may vary.
This is a used book - there is no escaping the fact it has been read by someone else and it will show signs of wear and previous use. Overall we expect it to be in very good condition, but if you are not entirely satisfied please get in touch with us
Trustpilot