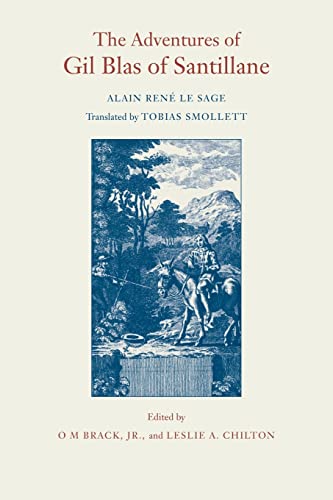 Tobias Smollett, in the preface to his first novel, The Adventures of Roderick Random (1748), acknowledges the influence of Alain Rene Le Sage's L'Histoire de Gil Blas de Santillane (1715-35 in four volumes) on his work. By far the most successful of useful and entertaining romances, Smollett writes, Gil Blas describes the knavery and foibles of life, with infinite humour and sagacity. The following sheets, he adds significantly, I have modeled on his plan.

Smollett's translation of Gil Blas appeared nine months after the publication of Roderick Random. This chronicle of a merry, philosophical young man whose adventures lead him into all levels of society from the highest to the lowest, presents special problems for a translator. Smollett, without always adhering to the literal expression of the novel's language, is true to its style, spirit, and ideas. After two and a half centuries, his remains the finest translation of this humorous, satiric, and classic French novel.

In his early years in London, Smollett struggled to find a way to distinguish himself through his medical practice, medical writings, poetry, and plays. None of these attempts, however, allowed him to demonstrate the full range of his personality and talents. Only when he combined his own boundless imagination with the skills he had learned from translating Gil Blas was he able to create energetic narratives filled with vivid and original characters.
O. M. Brack, Jr is a professor emeritus of English at Arizona State University, USA.

Leslie A. Chilton is a faculty associate at Arizona State University, USA.
NLS9780820346021
9780820346021
0820346020
The Adventures of Gil Blas of Santillane by Alain Rene Le Sage
Alain Rene Le Sage
The Works of Tobias Smollett
New
Paperback
University of Georgia Press
2014-01-15
740
N/A
Book picture is for illustrative purposes only, actual binding, cover or edition may vary.
This is a new book - be the first to read this copy. With untouched pages and a perfect binding, your brand new copy is ready to be opened for the first time
Trustpilot