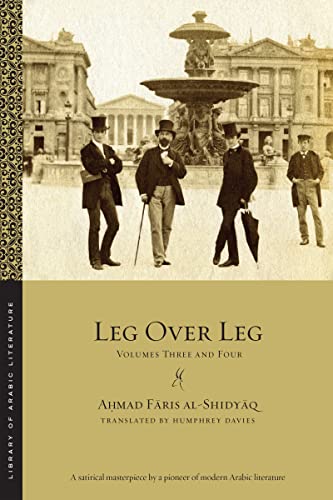 Leg over Leg recounts the life, from birth to middle age, of "the Fariyaq," alter ego of Ahmad Faris al-Shidyaq, a pivotal figure in the intellectual and literary history of the modern Arab world. The always edifying and often hilarious adventures of the Fariyaq, as he moves from his native Lebanon to Egypt, Malta, Tunis, England, and France, provide the author with grist for wide-ranging discussions of the intellectual and social issues of his time, including the ignorance and corruption of the Lebanese religious and secular establishments, freedom of conscience, women's rights, sexual relationships between men and women, the manners and customs of Europeans and Middle Easterners, and the differences between contemporary European and Arabic literatures, all the while celebrating the genius and beauty of the classical Arabic language.
Volumes Three and Four see the peripatetic Fariyaq fall in love and convert to Catholicism for twenty-four hours in order to marry. Although the narrative revolves around a series of debates over the nature of male-female relationships, opportunities also arise for disquisitions on the physical and moral significance of such diverse topics as the buttocks, the unreliability of virginity tests, and the human capacity for self-delusion. Lengthy stays in England and France allow for animadversions on the table manners and sexual aberrations of their citizens, but the discussion, whether it involve dance-halls, pleasure gardens, or poetry, almost always ends up returning to gender relations.
Akin to Sterne and Rabelais in his satirical outlook and technical inventiveness, al-Shidyaq produced in Leg over Leg a work that is unique and unclassifiable. It was initially widely condemned for its attacks on authority, its religious skepticism, and its "obscenity," and later editions were often abridged. This is the first complete English translation of this groundbreaking work.
An English-only edition.

"We're having a particularly good season for literary discoveries from the past, with recent publications of Volumes 1 and 2 of Ahmad Faris al-Shidyaq's 'Leg Over Leg' (1855)..." -- Martin Riker * New York Times Book Review *
"Humphrey Daviess masterful translation makes accessible this unique and fascinating work, deserving of wider recognition and study [] The translation adroitly and sympathetically captures the linguistic exuberance and literary inventiveness of the original" * Banipal Magazine *
"The heroic achievement of award-winning translator Humphrey Davies marks the first ever English translation of this pivotal work An accessible, informative, and highly entertaining read" * Banipal Magazine *
"Humphrey Davies translation, published in four dual-language volumes, is a triumph. He skillfully renders punning, rhyming prose without breaking the spell Leg Over Leg stands out for both its stylistic brazenness and the excellence of the translation. With this bilingual edition, the Library of Arabic Literature helps fill a large cultural gap and alters our view of Arabic literature and the formal trajectory of the novel outside the West. Any reader for whom the term & world literature is more than an empty platitude must read Humphrey Davies's translation." -- John Yargo * Los Angeles Review of Books *
"...Leg Over Leg by the Lebanese intellectual Ahmad Faris al-Shidyaq, [has] long been held to be untranslatable and so [is] appearing, in [its] entirety, in English for the first time." -- Lydia Wilson * Times Literary Supplement *
"It is not too early to state that the publication of this work, in this edition, is a game-changer. This is a foundational work of modern Arabic literature and its publication in English is long overdue but given how it is presented here, it was perhaps worth the wait. This edition, with helpful endnotes, the original Arabic text, and in a translation that both reads well and appears to closely mirror the original, seems, in almost every way, ideal I dont think Im exaggerating when I say that this is the most important literary publication of a translation into English, in terms of literary history and our understanding of it, in years" * The Complete Review *
"Al-Shidyaq, born in Lebanon in the early years of the nineteenth century, was a Zelig of the Arabic literary world, and his Leg Over Leg is a bawdy, hilarious, epically word-obsessed, and unclassifiable book, which has never been translated into English before." -- Sal Robinson * Moby Lives *
"Its contemporaneity is astonishing... It would be doing Leg Over Leg a massive disservice to not make it clear how funny it is. This is a book that for all its challenges, all its insight into humanity, all its place in history, had me regularly laughing out loud." * Music and Literature *
"Humphrey Davies has rendered one of the most challenging texts of Arabic literature, al-Shidyaq's al-Saq 'ala l-saq, accessible to a wide range of readers for the first time.... The reader is plunged into al-Shidyaq's critical, humorous, uninhibited, sometimes bitter but profoundly humane, and utterly original masterpiece." -- Hilary Kilpatrick * Journal of the American Oriental Society *
Ahmad Faris al-Shidyaq (Author)
Ahmad Faris al-Shidyaq (1805 or 1806-1887) was a foundational figure in modern Arabic literature. Born to a prominent Maronite family in Lebanon, al-Shidyaq was a pioneering publisher, poet, essayist, lexicographer and translator. Known as ""the father of Arabic journalism,"" al-Shidyaq played a major role in reviving and modernizing the Arabic language.
Humphrey Davies (Translator)
Humphrey Davies is an award-winning translator of some twenty-five works of modern Arabic literature, among them Alaa Al-Aswany's The Yacoubian Building, five novels by Elias Khoury, including Gate of the Sun, and Ahmad Faris al-Shidyaq's Leg over Leg. He has also made a critical edition, translation, and lexicon of the Ottoman-period Brains Confounded by the Ode of Abu Shaduf Expounded by Yusuf al-Shirbini, as well as editions and translations of al-Tunisi's In Darfur and al-Sanhuri's Risible Rhymes from the same era. In addition, he has compiled with Madiha Doss an anthology in Arabic entitled Al-'ammiyyah al-misriyyah al-maktubah: mukhtarat min 1400 ila 2009 (Egyptian Colloquial Writing: selections from 1400 to 2009) and co-authored, with Lesley Lababidi, A Field Guide to the Street Names of Central Cairo. He read Arabic at the University of Cambridge, received his Ph.D. from the University of California at Berkeley, and previous to undertaking his first translation in 2003, worked for social development and research organizations in Egypt, Tunisia, Palestine, and Sudan. He is affiliated with the American University in Cairo.
Table of Contents Leg Over Leg, Volume Three 1 Contents of the Book 4 Firing Up a Furnace 8 Love and Marriage 52 Contagion 108 Analepsis 126 Travel, and the Correction of a Common Misconception 134 A Banquet and Various Kinds of Hot Sauce 158 That Stinging Sensation You Feel When You Get Hot Sauce up Your Nose 174 Dreams 176 The Second Dream 184 The Third Dream 190 Physicking the Foul of Breath 200 A Voyage and a Conversation 214 A Maqamah to Make One Stand 250 Raveningly Ravenously Famished 272 The Journey from the Monastery 280 Ecstasy 288 An Incitement to Nudity 290 A Drain 300 Assorted Wonders 326 A Metropolitan Theft 344 Book Four Chapter 1: Unleashing a Sea 10 Chapter 2: A Farewell 28 Chapter 3: Assorted Pleas for Mercy 50 Chapter 4: The Rules for Retelling 62 Chapter 5: The Superiority of Women 72 Chapter 6: A Discussion 84 Chapter 7: Compare and Contrast 96 Chapter 8: A Voyage Festinate and Language Incomprehensibly and Inscrutably Intricate 112
NLS9781479813292
9781479813292
147981329X
Leg over Leg: Volumes Three and Four by Ahmad Faris al-Shidyaq
Ahmad Faris al-Shidyaq
Library of Arabic Literature
New
Paperback
New York University Press
2015-10-15
600
N/A
Book picture is for illustrative purposes only, actual binding, cover or edition may vary.
This is a new book - be the first to read this copy. With untouched pages and a perfect binding, your brand new copy is ready to be opened for the first time
Trustpilot