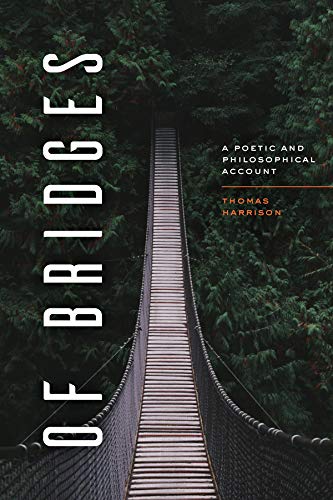 Of Bridges: A Poetic and Philosophical Account Thomas Harrison

Always, wrote Philip Larkin, it is by bridges that we live. Bridges represent our aspirations to connect, to soar across divides. And it is the unfinished business of these aspirations that makes bridges such stirring sights, especially when they are marvels of ingenuity.

A rich compendium of myths, superstitions, literary and ideological figurations, as well as architectural and musical illustrations, Of Bridges organizes a poetic and philosophical history of bridges into nine thematic clusters. Leaping in lucid prose between seemingly unrelated times and places, Thomas Harrison gives a panoramic account of the diverse meanings and valences of human bridges, questioning why they are built and where they lead. He investigates bridges as flashpoints in war and the mega-bridges of our globalized world. He probes links forged by religion between life's transience and eternity and the consolidating ties of music, illustrated in a case study of the blues. He illuminates the real and symbolic crossings facing migrants each day and the affective connections that make persons and societies cohere. In fine and intricate readings of literature, philosophy, art, and geography, Harrison engages in a profound reflection on how bridges form and transform cultural communities. Interdisciplinary and deeply lyrical, Of Bridges is a mesmerizing, vertiginous tale of bridges both visible and invisible, both lived and imagined.

Of Bridges is a dazzling investigation into the profound semantic and historical resonance of the seemingly simple word bridge, that passage between two points that is unique in its material, metaphoric, and philosophical properties. Harrison has chapters on every possible aspect of bridging, for example, the musical bridge, the poetic bridge as in Hart Crane's famous poem by that title, the actual historic bridges of Greece and Rome, and the 'thought' bridges of Nietzsche and Heidegger. Throughout, Harrison's book is astonishingly learned, well written, and imaginative. Bridges will never be the same after this brilliant study. * Marjorie Perloff, Stanford University *
Of Bridges is an extraordinarily sweeping study of bridges as cultural signifiers, extending its analysis from ancient Rome to the contemporary footbridges of major European cities, and providing much intricate detail along the way. This work is a tour de force in multidisciplinary cultural history, presenting the bridge as a simultaneously connective and separating structure, from which Harrison deduces an ensemble of political and ethical ideas. The scholarship is astounding in its particularity, the writing and interpretations brilliant. * Daniela Bini, University of Texas at Austin *

Keenly erudite, imaginative, interdisciplinary, and lyrical, Of Bridges is a monumental piece of scholarship. Harrison has written a Calvinoesque tale of bridges both invisible and visible, ontological and epistemological. Harrison draws upon his vast knowledge of Italian art and literature to offer a genealogy of thought reflected through and with bridges. In this work, Harrison himself becomes the bridge that he writes about, bringing together events and forms in unique and insightful ways.

* Timothy Campbell, Cornell University *
Thomas Harrison is professor of European Languages and Transcultural Studies at the University of California, Los Angeles. He is the author of 1910: The Emancipation of Dissonance and Essayism: Conrad, Musil, and Pirandello as well as the editor of Nietzsche in Italy and The Favorite Malice: Ontology and Reference in Contemporary Italian Poetry.
List of Illustrations
Introduction

1. The Great Bridge-Building of God

2. Living on the Bridge

6. The Bridge as Gallows