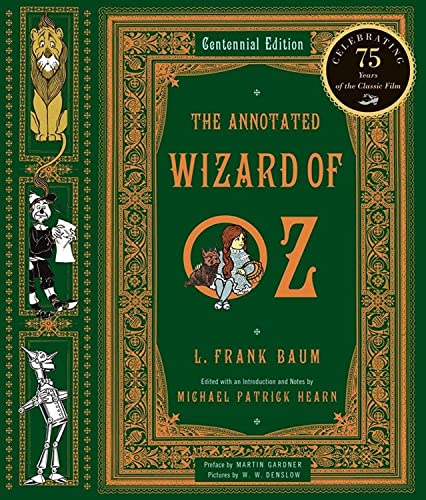 In celebration of the 100th anniversary of its publication, a beautifully illustrated annotation of The Wizard of Oz, complete with an exact reproduction of the original 1900 edition.

The Wonderful Wizard of Oz is the quintessential American fairy tale. Michael Patrick Hearn, the world's leading Oz scholar, now provides a fascinating new annotation that not only reacquaints readers with the Tin Woodman, Scarecrow, and Cowardly Lion, but also illuminates the colorful background of this treasured American classic. This edition explores numerous contemporary references, provides character sources, and explains the actual meaning of the word "Oz." A facsimile of the rare 1900 first edition appears with the original drawings by W.W. Denslow, as well as 25 previously unpublished illustrations. There is a bibliography of L. Frank Baum's published work, every notable "Oz" edition, and the stage and cinematic productions from 1939's The Wizard of Oz, to the 1974 Broadway hit, The Wiz. A beautiful, awe-inspiring work, The Annotated Wizard of Oz is an enduring tribute to the timeless joy of The Wizard of Oz, and a classic to rival Baum's own.
"I have never known or heard of an American man or woman who has started to read The Wonderful Wizard of Oz and put it down without finishing it." -- James Thurber
"If you ever talk to anyone who has written, you'll always find a childhood in which, somewhere along the line, there's a Wizard of Oz." -- William Styron
"Seeing The Wizard of Oz made a writer of me." -- Salman Rushdie
L. Frank Baum (1856-1919) was an American author, poet, playwright, actor, and independent filmmaker best known today as the creator-along with illustrator W. W. Denslow-of one of the most popular books in American children's literature, The Wonderful Wizard of Oz. He wrote thirteen Oz sequels, nine other fantasy novels, and a plethora of other works, and brought several of his works to the stage and screen. His is known to his fans as "The Royal Historian of Oz." Michael Patrick Hearn has written for the New York Times, The Nation, and many other publications. His books include From the Silver Age to Stalin: Russian Children's Book Illustration and The Porcelain Cat; he has edited The Victorian Fairy Tale Book, The Annotated Wizard of Oz, The Annotated Christmas Carol, and The Annotated Huckleberry Finn. Hearn lives in New York City. W. W. Denslow (1856-1915) was a prolific illustrator, cartoonist, and caricaturist, best remembered for his work in collaboration with author L. Frank Baum, especially his illustrations of The Wonderful Wizard of Oz, the first of the Oz books. An editorial cartoonist with a strong interest in politics, Denslow also illustrated his own books including Denslow's Mother Goose (1901), Denslow's Night Before Christmas (1902) and the 18-volume Denslow's Picture Books series (1903-4). The royalties from the print and stage versions of The Wizard of Oz were sufficient to allow Denslow to purchase Bluck's Island in Bermuda, and crown himself King Denslow I. However, he drank his money away, and he died in obscurity, of pneumonia. Martin Gardner (1914-2010) is regarded as one of the world's leading experts on Lewis Carroll and his work. The author of more than a hundred books, he wrote the "Mathematical Games" column for Scientific American for twenty-five years and has been hailed by Douglas Hofstadter as "one of the great intellects produced in this country in this century."
GOR004296372
9780393049923
0393049922
The Annotated Wizard of Oz L. Frank Baum
L. Frank Baum
The Annotated Books
Occasion - Très bon état
Relié
WW Norton & Co
2000-09-17
544
N/A
La photo du livre est présentée à titre d'illustration uniquement. La reliure, la couverture ou l'édition réelle peuvent varier.
Il s'agit d'un livre d'occasion - par conséquent, il a été lu par quelqu'un d'autre et il présente des signes d'usure et d'utilisation antérieure. Dans l'ensemble, nous nous attendons à ce qu'il soit en très bon état, mais si vous n'êtes pas entièrement satisfait, veuillez prendre contact avec nous.