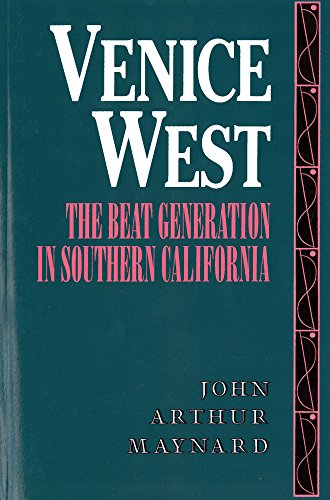 The beatnik was born in Venice, California, in the 1950s. An imaginary figure in many respects -the invention of both the media and the people who played the beatnik role- the character quickly assumed nearly mythic proportions for the American public. Coffeehouses, beards, poetry, drugs, and free-wheeling sexuality were all associated with the beatnik, the quintessential rebel who, by rejecting material values, represented both a threat and an alluring alternative to the dominant middle-class culture.

In this fascinating book, John Arthur Maynard tells the story of the poets and promoters who invented the Beat Generation and who, in many cases, destroyed themselves in the process. In this look at the least remembered (but in its time, most publicized) beat enclave, Maynard focuses on two of Venice's most newsworthy residents -Lawrence Lipton and Stuart Z. Perkoff. Lipton began as a writer of popular detective stories and screenplays, but was determined to be recognized as a poet and social critic. He eventually published The Holy Barbarians, which helped to create the enduring public image of the beatnik. Stuart Perkoff was a more gifted poet; with fascination and horror, we follow his failed attempts to support his family, his heroin addiction, his first wive's courage and mental fragility, his sexual entanglements, his imprisonment, and the development of his own writing. Other characters who move in and out of the story are Kenneth Rexroth, Jack Kerouac, and Allen Ginsberg, as well as lesser-known poets, artists, hangers-on, and the many women who were rarely treated as full members of the community.