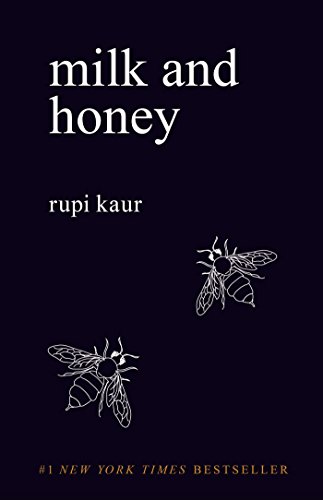 Milk and Honey by Rupi Kaur

milk and honey is a collection of poetry and prose about survival. About the experience of violence, abuse, love, loss and femininity.

Milk and Honey by Rupi Kaur

#1 New York Times bestseller Milk and Honey is a collection of poetry and prose about survival. About the experience of violence, abuse, love, loss, and femininity.

The book is divided into four chapters, and each chapter serves a different purpose. Deals with a different pain. Heals a different heartache. Milk and Honey takes readers through a journey of the most bitter moments in life and finds sweetness in them because there is sweetness everywhere if you are just willing to look.
"At age 24, Rupi Kaur has been called the voice of her generation." (USA Today)
"Rupi Kaur has vision beyond her years ... Her work is simply but powerfully expressed, and viscerally captures both universal human experience and the particular struggles of a young woman today." (Huffington Post)
Rupi's poetry is simple, relatable, gorgeous, and grounded in the everyday experiences of young women. (Rachel Grate, Hello Giggles)
"A must-have poetry collection about healing and hope." (Bustle)
Rupi Kaur's first book, Milk and Honey is the poetry collection every woman needs on her nightstand or coffee table. Accompanied by her own sketches, the beautifully honest poems read like the everyday, collective experiences of today's modern woman. (Erin Spencer, Huffington Post)
"Discussing themes of love, loss, and healing, Milk and Honey finds a way to connect to every reader. " (Business Insider)
"Milk and Honey brings any tormented reader to an enlightened state of self-reflection that may have taken years to accomplish alone."
(Elite Daily)
The honest words of Rupi Kaur leave you continuously wanting more as she writes with eloquence and poise. Her work will send you to past thoughts and realities you might not have known you had.
(Sienna Brown, WildSpice Magazine)
Rupi Kaur's writing echoes of artistry and wisdom which is seen in the work of those that have been writing for years. (Samira Sawlani, Media Diversified)
Rupi Kaur is a poet, artist, and performer. Her works have taken the literary world by storm. Her second book, the sun and her flowers-an instant global bestseller, is an artistic sibling to her debut, milk and honey-one of America's bestselling books of 2017. "i am the product of all the ancestors getting together and deciding these stories need to be told." Rupi sees her work as an articulation of this vision. She's an eternal artist. At the age of five, her mother handed her a paintbrush and said, "draw your heart out." At seventeen, she happened upon a local open mic night where she performed her first spoken word poem. She fell in love with performance poetry that night. Rupi continued performing across Canada, while building a community of readers and poetry enthusiasts. While studying at the University of Waterloo, Rupi wrote, illustrated, and self-published her first collection, milk and honey. In the years since, milk and honey has become an international phenomenon. It's sold over 3 million copies, been translated into more than 35 languages, and landed as a #1 New York Times bestseller-where it has spent more than 100 consecutive weeks. "i am the first woman in my lineage with freedom of choice. to craft her future whichever way i choose. say what is on my mind when i want to. without the whip of the lash. there are hundreds of firsts i am thankful for." Rupi explores a variety of themes in her work ranging from love, loss, trauma, healing, femininity, migration, and revolution. She's a storyteller and chronicler-a repository of community and history. There's a simplicity and nuance to her work that has found a home in the hearts of millions. This magic is captured in her stage performances, which are magnetic musical interactions of poetry, art, and theater. Rupi's long-awaited second collection, the sun and her flowers, was published in 2017 and debuted as a #1 global bestseller. Within the first three months it sold a million copies and was embraced by readers worldwide. She's a Forbes 30 under 30, an editor of the 2016 Mays Literary Anthology of New Writing from the Universities of Oxford and Cambridge, and one of BBC's 100 Women. Rupi hopes to continue her artistic exploration through art and poetry-searching for ways to understand and articulate. i stand on the sacrifices of a million women before me thinking what can i do to make this mountain taller so the women after me can see farther - legacy
GOR008029430
9781449474256
144947425X
Milk and Honey by Rupi Kaur
Rupi Kaur
Used - Like New
Paperback
Andrews McMeel Publishing
2015-11-05
208
N/A
Book picture is for illustrative purposes only, actual binding, cover or edition may vary.
The book has been read, but looks new. The book cover has no visible wear, and the dust jacket is included if applicable. No missing or damaged pages, no tears, possible very minimal creasing, no underlining or highlighting of text, and no writing in the margins
Trustpilot