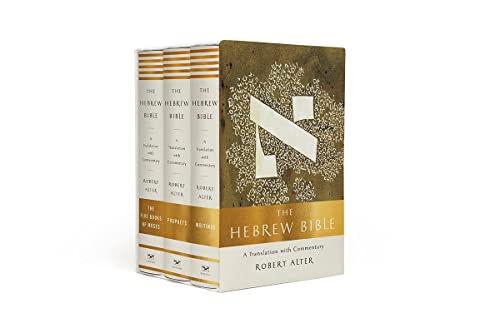 The Hebrew Bible by Robert Alter (University of California, Berkeley)

A landmark event: the complete Hebrew Bible in the award-winning translation that delivers the stunning literary power of the original.

The Hebrew Bible: A Translation with Commentary by Robert Alter (University of California, Berkeley)

A masterpiece of deep learning and fine sensibility, Robert Alter's translation of the Hebrew Bible, now complete, reanimates one of the formative works of our culture. Capturing its brilliantly compact poetry and finely wrought, purposeful prose, Alter renews the Old Testament as a source of literary power and spiritual inspiration. From the family frictions of Genesis and King David's flawed humanity to the serene wisdom of Psalms and Job's incendiary questioning of God's ways, these magnificent works of world literature resonate with a startling immediacy. Featuring Alter's generous commentary, which quietly alerts readers to the literary and historical dimensions of the text, this is the definitive edition of the Hebrew Bible.
"Alter's translation can be fairly described as a godsend. The foundational texts are here given their due in prose at once modern and magnificently cadenced. Immediately readable, immensely learned, an education and a restitution..." -- Seamus Heaney - Times Literary Supplement
"Encountering these books in this form-as ancient literature, laid out as poetry, with copious footnotes-allows you to be dazzled by their range, from the frank eroticism of the Song of Songs to the bucolic idyll of Esther and the downright weirdness of Daniel." -- New Statesman
"You think you know these texts, or you do until you read Alter, who reignites their beauty in bracing and unexpected ways." -- Malcolm Jones - Newsweek
"Sober, clear, and fluid... Masterful commentary." -- Edward Rothstein - The New York Times
"Thrilling and constantly illuminating." -- Michael Dirda - The Washington Post
"Musically and poetically sensitive... [Alter] takes us back to the essence of the meaning..." -- James Wood - The New Yorker
"A master translator of Hebrew poetry." -- Jon Meachan - The New York Times Book Review
"Alter has achieved the significant feat of refreshing English by taking it back to one of its sources of strength." -- Peter Ackroyd - The Times
"Alter is amazingly successful... [His] translations of many famous passages are primordially spare and dignified, the work of a scholar with an unusually sure ear for verse." -- Christopher Tayler - The Guardian
"In each of the Biblical books in this volume a balance of explanation, translation and commentary is offered. In each of them the reader is made a partner in an adventure of scholarship and clarification which is both rare and exemplary." -- Eavan Boland - The Irish Times
"Robert Alter's new translation of the Hebrew Bible draws out the literariness of the text." -- Prospect
"Most Biblical translations are teamwork; the so-called King James Version of the Bible was produced by forty-seven English churchmen. But Alter has, like Dr. Johnson with his dictionary, tackled the job on his own. The accomplishment, two decades in the making, is almost absurdly impressive. One wants to call it titanic or Olympian or even heroic, but those are the wrong words-pagan words. Alter will have to settle for one of the God-fearing Hebraic terms of praise that stipple his text: "righteous" or "strong" or, simply, "wise." -- Adam Gopnik - The New Yorker
"... truly magnificent translation... Mr. Alter's sense of the original's beauty and his representation of it may be different-rougher, blunter, more jagged, not so stately-but his translation is all the more compelling for that." -- The Wall Street Journal
"A monumental new translation of the Hebrew Bible." -- The Economist
"To translate the Bible into English in the early 17th century, King James approved a team of more than 50... When you think of these translating battalions, it puts into perspective the achievement of Robert Alter... Stretching to more than 3,000 pages including a commentary to enhance readers' appreciation of the text, it appears in three splendid volumes matching the traditional division of the Tanach- into Torah, Nevi'im, Prophets, and Ketuvim, the Writings (which include Proverbs, Psalms and the Megillot)." -- The Jewish Chronicle
"... both the translation and the commentary show that it is possible for one person to master the whole Hebrew Bible in a coherent and consistent way, and to shed light on both its style and its contents. Unusually for a consciously "literary" translation, Alter's work would also be usable as a study Bible, because it adheres so closely to the Hebrew, and even for liturgical reading since (unlike so many modern versions) it attends to the rhythms and cadences of the original. No one, whatever their religious tradition, can afford to ignore what will surely become a classic version." -- Jewish Quarterly
"Speaking of foundational works! The top spot this year, the best work in translation of 2018, is this magnificent culmination of twenty years' work: Robert Alter's complete translation of the Hebrew Bible, with lively and learned commentary throughout. All the joy and exploration of Alter's previously-published sections of this epic undertaking glow even brighter now that the work is complete." -- The Best Books of 2018: Works in Translation! - Open Letters Review
"The completion of Robert Alter's decades-long exercise in translating the entire Hebrew Bible is both a monumental event and achievement. Arguably, this is the most significant Hebrew and Jewish Studies publication of the 20th century, and certainly the 21st." -- Church Times
Robert Alter's translation of the Hebrew Bible, the magnificent capstone to a lifetime of distinguished scholarly work, has won the PEN Center Literary Award for Translation. His immense achievements in scholarship ranging from the eighteenth-century European novel to contemporary Hebrew and American literature earned Alter the Robert Kirsch Award for Lifetime Achievement from the Los Angeles Times. A member of the American Academy of Arts and Sciences and the American Philosophical Society, Alter is the Class of 1937 Professor of Hebrew and Comparative Literature at the University of California, Berkeley.
NGR9780393292497
9780393292497
0393292495
The Hebrew Bible: A Translation with Commentary by Robert Alter (University of California, Berkeley)
Robert Alter (University of California, Berkeley)
New
Hardback
WW Norton & Co
2018-12-18
N/A
Book picture is for illustrative purposes only, actual binding, cover or edition may vary.
This is a new book - be the first to read this copy. With untouched pages and a perfect binding, your brand new copy is ready to be opened for the first time
Trustpilot