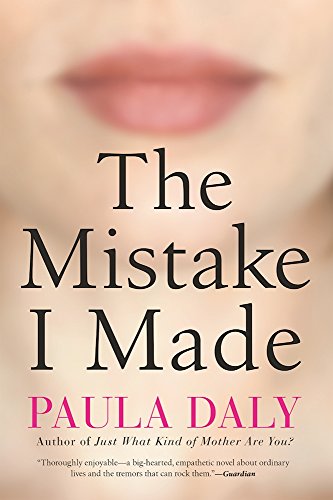 The Mistake I Made by Paula Daly

"First published in Great Britain in 2015 by Bantam Press, an imprint of Transworld Publishers"--Title page verso.

The Mistake I Made by Paula Daly

In this provocative and riveting thriller, Paula Daly focuses her masterful eye for psychological suspense and family drama on a clandestine affair that has fatal repercussions.

Single mother Roz has reached breaking-point. After the dissolution of her marriage, her business has gone under, debts are racking up, the rent is late again, and she's struggling to provide for her nine-year-old son, who is starting to misbehave in school. When she returns home from work one day to find an eviction notice, she has two weeks to come up with a solution before they're kicked out. Roz is in trouble, real trouble, and she doesn't know where to turn. Then an unusual opportunity presents itself.

At her sister's birthday party, Roz meets Scott Elias--wealthy, powerful, and very married--and she leaves an indelible impression on him. So much so that he tracks her down and makes her an offer: to spend the night with him . . . for money. He wants no-strings-attached intimacy and can guarantee total discretion. With that kind of cash, Roz could clear her debts and get her life back on track. But how much is Roz willing to compromise in order to keep her family safe? As the seemingly straightforward arrangement grows ever complicated, Scott becomes obsessive and dangerously controlling, and Roz is forced to do things she never thought herself capable of in order to safeguard her life.

The latest page-turner from one of England's most captivating thriller writers, The Mistake I Made takes a gripping turn into a world of sex, blackmail, and murder within a tightly-knit community that is more familiar with solitude than scandal.

Paula Daly is the author of Just What Kind of Mother Are You? and Keep Your Friends Close. She lives in North West England with her husband, three children, and their dog Skippy. The Mistake I Made is her third novel.
CIN000236962
9780802125699
0802125697
The Mistake I Made by Paula Daly
Paula Daly
Used - Very Good
Paperback
Black Cat
2016-09-29
352
N/A
Book picture is for illustrative purposes only, actual binding, cover or edition may vary.
This is a used book - there is no escaping the fact it has been read by someone else and it will show signs of wear and previous use. Overall we expect it to be in very good condition, but if you are not entirely satisfied please get in touch with us
Trustpilot