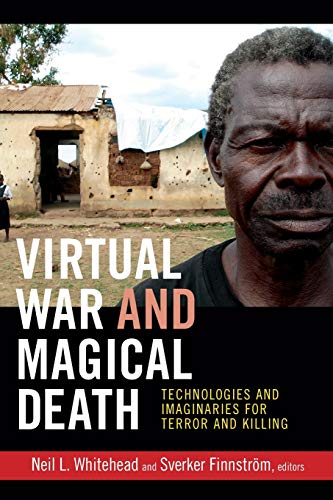 The contributors to this provocative collection scrutinize the relations between anthropology and contemporary global war, contending that modern high-tech warfare is analogous to rituals of magic and sorcery, and examining the U.S. military's exploitation of ethnographic research.

Virtual War and Magical Death: Technologies and Imaginaries for Terror and Killing by Neil L. Whitehead

Virtual War and Magical Death is a provocative examination of the relations between anthropology and contemporary global war. Several arguments unite the collected essays, which are based on ethnographic research in varied locations, including Guatemala, Uganda, and Tanzania, as well as Afghanistan, Pakistan, Iraq, and the United States. Foremost is the contention that modern high-tech warfare-as it is practiced and represented by the military, the media, and civilians-is analogous to rituals of magic and sorcery. Technologies of virtual warfare, such as high-altitude bombing, remote drone attacks, night-vision goggles, and even music videoes and computer games that simulate battle, reproduce the imaginative worlds and subjective experiences of witchcraft, magic, and assault sorcery long studied by cultural anthropologists.

Another significant focus of the collection is the U.S. military's exploitation of ethnographic research, particularly through its controversial Human Terrain Systems (HTS) Program, which embeds anthropologists as cultural experts in military units. Several pieces address the ethical dilemmas that HTS and other counterinsurgency projects pose for anthropologists. Other essays reveal the relatively small scale of those programs in relation to the military's broader use of, and ambitions for, social scientific data.

Virtual War and Magical Death is a creative project that is bound to stimulate constructive conversation. It inserts contemporary technologies of warfare, particularly the U.S. Army's Human Terrain System, into sociocultural anthropology's current reflections on its theoretical and methodological practices, as well as the purposes of ethnographic inquiry within and beyond the discipline.-Carol J. Greenhouse, author of The Paradox of Relevance: Ethnography and Citizenship in the United States
By placing in brackets conventional ways of contrasting modernity and premodernity, the contributors to this groundbreaking collection of essays bring into startling relief the phenomenological commonalities that underlie warfare and witchcraft, militarism and magic, while offering radically new insights into the virtual and ritual dimensions of violence and the 'war on terror.'-Michael Jackson, author of Life Within Limits: Well-being in a World of Want
The book is strongly recommended, not least to those who are tasked with finding out whether 'smart' warfare does what it says on the box. -- Paul Richards * Journal of Military History *
[E]nchanting, ethnographic- and analysis-full.... this volume gathers some of anthropology's most knowledgeable war scholars who collectively identify the enormous scope of contemporary virtual war in its multiple meanings and applications. -- Alisse Waterston * The Australian Journal of Anthropology *
The volume elegantly frames early-twenty-fi rst-century militarism as a form of magical thinking. The result is a collection that successfully, and productively, brings into dialogue chapters that cover the origins of the US military's Human Terrain Systems and drone warfare programs with chapters on diamond diggers in rural Tanzania and the expansion of police violence in postwar Guatemala. -- Danny Hoffman * Journal of Anthropological Research *
A powerful critique of the hubristic illusion perpetuated by the military, that the infinite diversity, ambiguity and creativity of the social may be tamed through proper techno-cultural management. -- Malay Firoz * Social Anthropology *
This is a valuable collection.... It is a fine tribute to Neil Whitehead, whose insights on why we kill each other will be sorely missed. -- Chris Hables Gray * Technology and Culture *

Neil L. Whitehead (1956-2012) was Professor of Anthropology at the University of Wisconsin, Madison. His books Dark Shamans: Kanaima and the Poetics of Violent Death and In Darkness and Secrecy: The Anthropology of Assault Sorcery and Witchcraft in Amazonia (coedited with Robin Wright) are both published by Duke University Press.