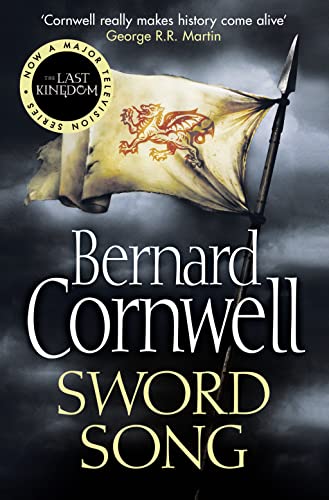 The fourth novel in Bernard Cornwell's epic and bestselling series on the making of England and the fate of his great hero, Uhtred of Bebbanburg.

The fourth novel in Bernard Cornwell's epic and bestselling series on the making of England and the fate of his great hero, Uhtred of Bebbanburg.

To serve a king or become one? Uhtred - warrior, pagan, scourge of the Vikings - faces a hard choice.

Despite being offered a crown of his own, Uhtred is a man of his word. And he gave it to King Alfred of Wessex, who dreams of an England free from Vikings. So when the king orders him to take London from the Danes and hand it to his foolish son-in-law Aethelred, Uhtred agrees despite his concerns.

For Aethelred's wife is the king's spirited daughter Aethelflaed and her fate is entwined with Uhtred's. And fate will not be denied ...

Uhtred of Bebbanburg's mind is as sharp as his sword. A thorn in the side of the priests and nobles who shape his fate, this Saxon raised by Vikings is torn between the life he loves and those he has sworn to serve.

Praise for `The Lords of the North':

`Beautifully crafted story-telling, complete with splendid set-piece battles and relentless derring-do, so gripping that it rarely stops to catch a breath. It demonstrates once again Cornwell's enormous skill as a historical narrator. He would have graced Alfred's court entertaining the guests with his stories'
Daily Mail

`Cornwell takes the spectres of ninth century history and puts flesh back on their bones. Here is Alfred's world restored - impeccably researched and illuminated with the colour and passion of a master storyteller'
Justin Pollard, author of `Alfred the Great'

'Bernard Cornwell is a literary miracle. Year after year, hail, rain, snow, war and political upheavals fail to prevent him from producing the most entertaining and readable historical novels of his generation.'
Daily Mail

'Cornwell's narration is quite masterly and supremely well-researched'
Observer

CIN000216842
9780007219735
0007219733
Sword Song (The Last Kingdom Series, Book 4) by Bernard Cornwell
Bernard Cornwell
The Last Kingdom Series
Used - Very Good
Paperback
HarperCollins Publishers
2008-05-06
384
N/A
Book picture is for illustrative purposes only, actual binding, cover or edition may vary.
This is a used book - there is no escaping the fact it has been read by someone else and it will show signs of wear and previous use. Overall we expect it to be in very good condition, but if you are not entirely satisfied please get in touch with us
Trustpilot