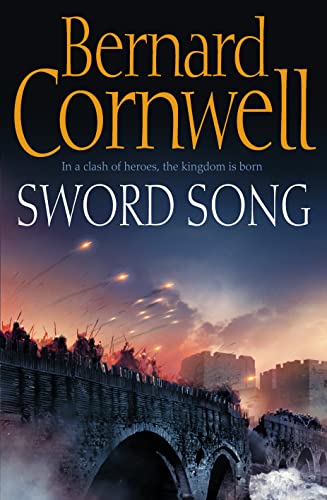 The fourth in the bestselling Alfred series from number one historical novelist, Bernard Cornwell.

The fourth in the bestselling Alfred series from number one historical novelist, Bernard Cornwell.

The year is 885, and England is at peace, divided between the Danish kingdom to the north and Alfred's kingdom of Wessex in the south. But trouble stirs, a dead man has risen and new Vikings have arrived to occupy London.

It is a dangerous time, and it falls to Uhtred, half Saxon, half Dane, a man feared and respected the length and breadth of Britain, to expel the Viking raiders and take control of London for Alfred. His uncertain loyalties must now decide England's future.

A gripping tale of love, rivalry and violence, Sword Song tells the story of England's making.

`The characterisation, as ever, is excellent...And one can only admire the little touches that bring the period to life: the bitter weather; the swollen rivers; the soliders gossiping about ale and women...he can also claim to be a true poet of both the horror and the glory of war, showing a feeling for the ways of fighting men which is too often lacking in the politicians who send them into battle.'
Sunday Telegraph

This is typical Cornwell, meticulously researched, massive in scope, brilliant in execution'. News of the World

`There are many authors who are now writing historical fiction, and some of them are almost as good as Cornwell, but so far there's none better.'
Yorkshire Evening Post

`...this will not disappoint Cornwell's legions of fans.' Western Daily Press

GOR001742030
9780007219711
0007219717
Sword Song (The Last Kingdom Series, Book 4) by Bernard Cornwell
Bernard Cornwell
The Last Kingdom Series
Used - Well Read
Hardback
HarperCollins Publishers
2007-09-03
336
N/A
Book picture is for illustrative purposes only, actual binding, cover or edition may vary.
This is a used book. We do our best to provide good quality books for you to read, but there is no escaping the fact that it has been owned and read by someone else previously. Therefore it will show signs of wear and may be an ex library book
Trustpilot