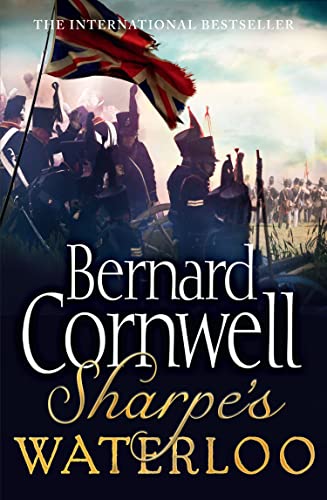 Lieutenant-Colonel Sharpe, sidelined on the Royal staff, magnificently siezes command at the final moment of the great victory.

Lieutenant-Colonel Sharpe, sidelined on the Royal staff, magnificently siezes command at the final moment of the great victory.

It is 1815. Sharpe is serving on the personal staff of the Prince of Orange, who refuses to listen to Sharpe's reports of an enormous army, led by Napoleon, marching towards them.

The Battle of Waterloo commences and it seems as if Sharpe must stand by and watch the grandest scale of military folly. But at the height of battle, as victory seems impossible, Sharpe takes command and the most hard-fought and bloody battle of his career becomes his most magnificent triumph.

Richard Cornwell was born in London, raised in Essex and now mostly lives in the USA. He is the author of the Arthurian series, the Warlord Chronicles; the Starbuck Chronicles, on the American Civil War; Stonehenge; the grail Quest Series; Gallow's Thief and The Last Kingdom.

GOR004403854
9780007452903
000745290X
Sharpe's Waterloo: The Waterloo Campaign, 15-18 June, 1815 (The Sharpe Series, Book 20) by Bernard Cornwell
Bernard Cornwell
The Sharpe Series
Used - Very Good
Paperback
HarperCollins Publishers
2012-06-07
448
N/A
Book picture is for illustrative purposes only, actual binding, cover or edition may vary.
This is a used book - there is no escaping the fact it has been read by someone else and it will show signs of wear and previous use. Overall we expect it to be in very good condition, but if you are not entirely satisfied please get in touch with us
Trustpilot