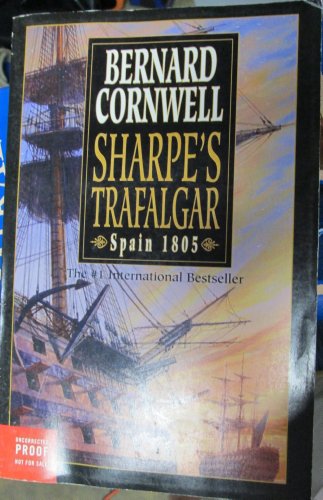 In this adventure, Sharpe is on his way home from India. He is sailing with the Royal Navy, who are hunting a formidable French warship, the `Revenant', carrying a secret treaty that may prove lethal to the British.

The `Revenant' makes it to the safety of the French and Spanish fleets off Cadiz, and it seems Sharpe's enemies have found safety. Yet over the horizon is another fleet, led by Nelson, and Sharpe's revenge will come in a savage climax when the two armadas meet on a calm October day off Cape Trafalgar.

GOR003179915
9780007235162
B002NKUJA6
Sharpe's Trafalgar: The Battle of Trafalgar, 21 October 1805 (The Sharpe Series, Book 4) by Bernard Cornwell
Bernard Cornwell
The Sharpe Series
Used - Very Good
Paperback
HarperCollins Publishers
2006-08-01
384
N/A
Book picture is for illustrative purposes only, actual binding, cover or edition may vary.
This is a used book - there is no escaping the fact it has been read by someone else and it will show signs of wear and previous use. Overall we expect it to be in very good condition, but if you are not entirely satisfied please get in touch with us
Trustpilot